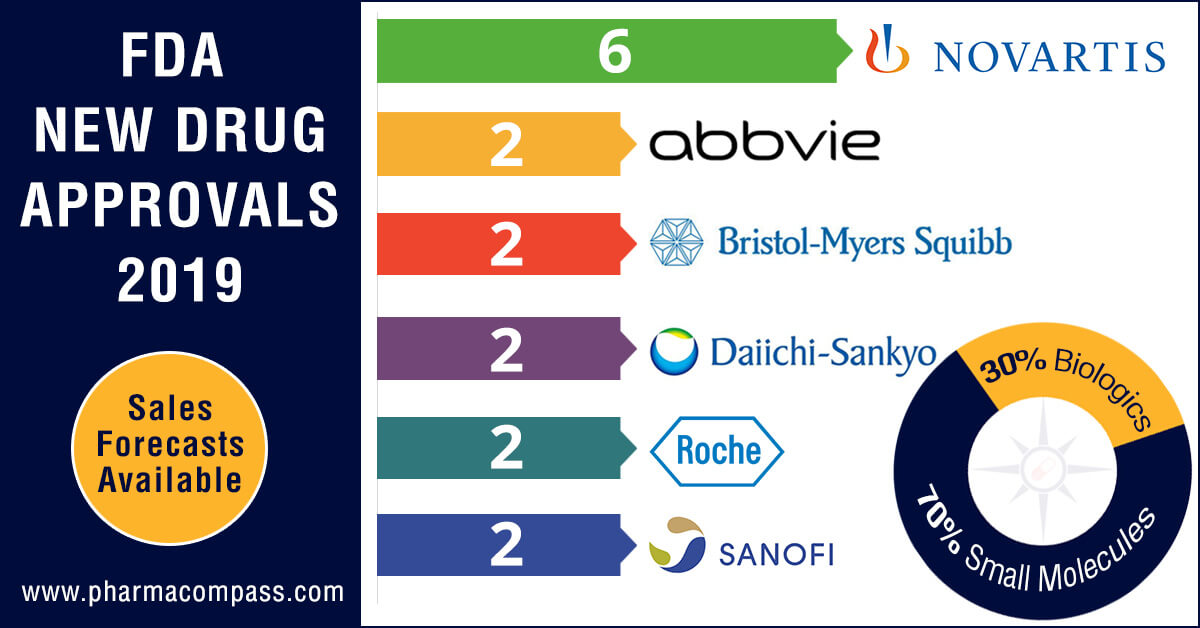 Novartis dominated new drug approvals as CDER approved five of its new drugs across five different therapeutic areas. But then, it also made headlines when the FDA raised data accuracy issues over the Swiss drugmaker’s gene therapy — Zolgensma — which sent the company into a crisis management mode.

The gene therapy drug came into the fold of Novartis in April 2018 through the US$ 8.7 billion acquisition of Illinois-based AveXis Inc.

Zolgensma — the world’s most expensive drug — was approved as a one-time treatment for spinal muscular atrophy (SMA) in May 2019.

However, in March 2019, Novartis learnt of manipulation in the raw data derived from a mice assay used at the time to test Zolgensma samples, but only alerted the FDA in June — about a month after the drug gained US approval.

Post that, Novartis came under fire from US lawmakers who said the company should have informed the regulators about the data irregularities before the drug’s approval in May, instead of waiting to conclude an internal investigation.

At PharmaCompass, we compiled the sales forecasts for the new drugs approved by the FDA in 2019. Vertex’s cystic fibrosis treatment — Trikafta — with expected sales of US$ 3.935 billion by 2024, leads our list.

Abbvie’s Humira, the top-selling drug in the world, is beginning to face generic competition in certain parts of the world and two new drug approvals in 2019 — Skyrizi (risankizumab for plaque psoriasis) and Rinvoq (upadacitinib for rheumatoid arthritis) — are critical to AbbVie's plans to grow beyond Humira. The two drugs are expected to contribute over US$ 5.5 billion by 2024 to AbbVie’s top-line.

In April, AstraZeneca struck a deal worth US$ 6.9 billion with Japanese drug major Daiichi Sankyo, to jointly develop and commercialize the antibody drug conjugate cancer therapy —trastuzumab deruxtecan. The breast cancer treatment won FDA approval in December and analysts forecast sales of US$ 2.5 billion by 2024 with some believing that the drug could achieve US$ 7 billion in peak sales.

The rise of new drugs from Asia

Shionogi’s novel antibiotic — Fetroja (cefiderocol) — got approved for complicated urinary tract infections while Kyowa won the nod for its Parkinson’s treatment — Nourianz (istradefylline). Eisai’s insomnia drug — Dayvigo (lemborexant) — was one of the last drugs approved in the year and is expected to generate sales of US$ 329 million.

This was followed, almost immediately, by news that the agency approved a new treatment for partial-onset seizures in adults. The drug — cenobamate — will be sold as Xcopri by SK Life Science, the US subsidiary of the massive Korean conglomerate SK Group. Xcopri will provide another therapeutic option to patients with epilepsy. This approval marked the first time a Korean company independently took a compound from the stage of discovery to FDA approval.

Xcopri is SK Life Science’s first commercial product and wraps a decade of quiet growth from SK Life Science, which has been developing its presence in the pharmaceutical industry.

The company plans to hire a salesforce to support the drug’s launch, which is expected to generate over US$ 1.5 billion in sales.

The FDA very narrowly approved Sanofi’s controversial dengue vaccine — Dengvaxia. The vaccine, which took 20 years to develop, got embroiled in a controversy when in 2017, Sanofi disclosed that Dengvaxia could increase the risk of severe dengue in children who had never been exposed to the virus.

In Philippines, 800,000 school-age children had been vaccinated against dengue, the world’s fastest growing infectious disease.

The year 2019 had begun with Bristol-Myers Squibb (BMS) and Celgene announcing their US$ 74 billion mega-merger. As the firms worked through the year to get the merger approved, the FDA signed off on Celgene’s myelofibrosis drug Inrebic (fedratinib).

Inrebic — the once-daily oral drug — is the first new treatment in nearly a decade approved to treat myelofibrosis. The story of Inrebic’s rise from the dead is a major success for Celgene, which picked up the drug as a part of a US$ 1.1 billion acquisition of Impact Biomedicines in January 2018. Before that, Inrebic had passed through multiple hands.

Fedratinib was a flop for Sanofi as patients began to develop a dangerous neurological condition tied to vitamin B deficiency called Wernicke’s encephalopathy. As a result, the FDA put a clinical hold on it in 2013 and Sanofi ultimately shelved the effort.

Executives at BMS have said the drug is among a group of potential blockbusters at Celgene.

With over 40 companies from across the world getting new drugs approved in 2019 across 17 therapeutic areas, the horizon for new drug development across the globe continues to widen.

Although 2018 was a landmark year for approvals, given all the development activity underway, the day is not far when this record too will get beaten. And 2020 could well witness that day!

Image Credit : FDA New Drug Approvals in 2019 by PharmaCompass is licensed under CC BY 2.0