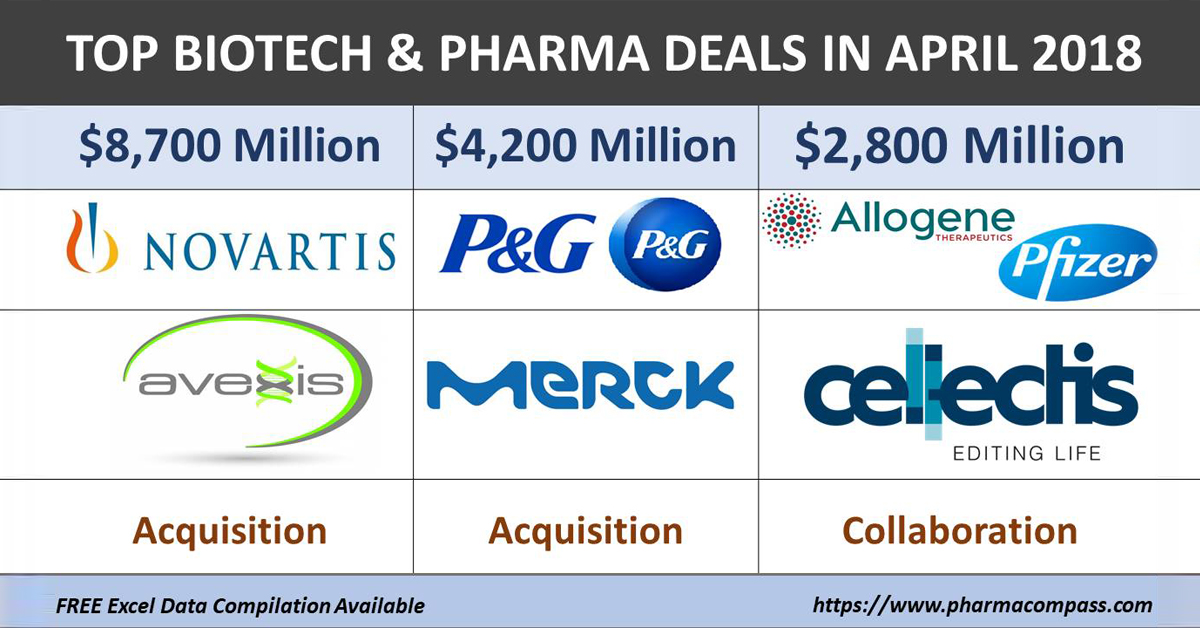 Insofar as pharma M&As are concerned, 2018 is turning out to be a milestone year with more than US$ 170 billion invested in the first quarter alone. While March saw a steep climb in deal values with the Cigna-Express Scripts US$ 67 billion acquisition, April remained significant for Novartis’ renewed interests in gene therapy — the Swiss pharma giant acquired AveXis, a clinical-stage gene therapy company, for US$ 8.7 billion.

In a bid to secure its leadership position in gene therapy, Novartis struck a deal to acquire Illinois-based AveXis, a clinical-stage gene therapy company working to develop treatments of rare and life-threatening neurological genetic diseases.

AveXis’ lead pipeline candidate is a neurology-targeted treatment based on virus-mediated gene therapy — AVXS-101. It has the potential to be the first one-time gene replacement therapy for spinal muscular atrophy (SMA), a disease which results in early death or lifelong disability with considerable healthcare costs.

In addition, AVXS-101 has attained the Breakthrough Therapy Designation in the US and the Sakigake Designation in Japan. Moreover, this therapy, which is currently in Clinical Phase 3 development, also has access into the PRIority MEdicines (PRIME) scheme in the EU.

Novartis CEO Vas Narasimhan said recently the patient population for SMA was 23,500 people in established markets. A filing with the US Food and Drug Administration (FDA) for AVXS-101 is expected in the second half of 2018 and approval and launch in the US is expected in 2019.

Proctor & Gamble, one of the world’s largest personal care goods manufacturer, announced in mid-April that it has agreed to buy Merck KGaA’s consumer health unit for US$ 4 billion (€3.4 billion). This was just weeks after GlaxoSmithKline announced its buyout of Novartis’ consumer healthcare joint venture for US$ 13 billion.

Priced at US$ 4.2 billion, the deal enables P&G to expand its successful consumer healthcare business by adding a fast-growing portfolio of differentiated, physician-supported brands across a broad geographic footprint.

According to Reuters, the purchase price for Merck’s business suggests the German consumer healthcare conglomerate climbed down from price demands of as much as US$ 4.71 billion (€4 billion), which may have deterred initial suitors such as Nestle.

Biogen announced in April this year that the transaction builds upon the collaboration that produced Spinraza as well as two antisense drug candidates currently in the clinic, with the potential to advance up to seven more drug candidates to the clinic within the next two years.

Biogen’s announcement came less than two weeks after AstraZeneca paid Ionis a US$ 30 million license fee for its potential treatment for nonalcoholic steatohepatitis (NASH) where the inhibition target is undisclosed.

Ionis stands to receive up to US$ 300 million in additional development and regulatory milestone payments, as well as tiered royalties from sales of the drug.

Speaking about the development, Brett P. Monia, CEO and senior vice president of Antisense Drug Discovery at Ionis Pharmaceuticals said: “AstraZeneca has played a strategic role in advancing this program forward by providing both preclinical and development expertise in NASH that has contributed to the rapid advance of this drug into development. We look forward to AstraZeneca moving this program swiftly into clinical testing and ultimately to the market.”

Shire announced it was selling its oncology business to French company Servier for US$ 2.4 billion, whilst Takeda said it was considering an acquisition bid for Shire.

Servier has obtained the rights to Shire’s presently marketed chemotherapy agent, Oncaspar, and pancreatic cancer treatment, Onivyde. Additionally, Shire’s pipeline of immuno-oncology assets (including Calaspargase Pegol under priority review) are all part of the offerings that were made during the divestment to Servier.

For Servier, the acquisition of Shire’s oncology franchise enables it to establish a stronger “commercial presence in the US as well as the ex-US territories where Servier is already present,” Olivier Laureau, President of the Servier Group, said.

The immune-oncology collaboration provides Allogene exclusive rights to develop 16 preclinical assets including UCART19 — a CAR T-cell product jointly developed by Servier and Pfizer that Pfizer had earlier licensed from Cellectis and Servier.

Cellectis’ CAR-T platform provides an allogeneic approach of using engineered T-cells from healthy donors, which makes T-cell therapy more accessible to cancer patients. This is distinct from autologous approaches that require the patient’s own T-cells for targeting tumor cells.

Deals by major pharmaceutical companies during the month of April continued to be driven by their focus on gene therapy and immuno-oncology.

While companies like Novartis, Biogen, AstraZeneca and Boehringer-Ingelheim are betting big on drugs that are still in development, others like Proctor & Gamble, Servier and Takeda have chosen to acquire proven assets that will immediately contribute to their sales.

All eyes are set on Pfizer, which is exploring a sale of its consumer healthcare business. However, the pharma major has seen potential suitors drop out and during an earnings call a few weeks ago, its chairman Ian Read ruled out a transformative deal.

“I don’t see that we need a transformative deal or see one at an appropriate value,” Read had said. Even if the Pfizer deal does not prove to be transformative, the M&A deals in the first few months of 2018 surely indicate that the world of pharmaceuticals is transforming at a fast pace.

Image Credit : Top Biotech and Pharma Deals in April 2018 by PharmaCompass is licensed under CC BY 2.0