Top drugs by sales in 2017: Who sold the blockbuster drugs? 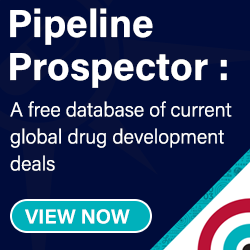 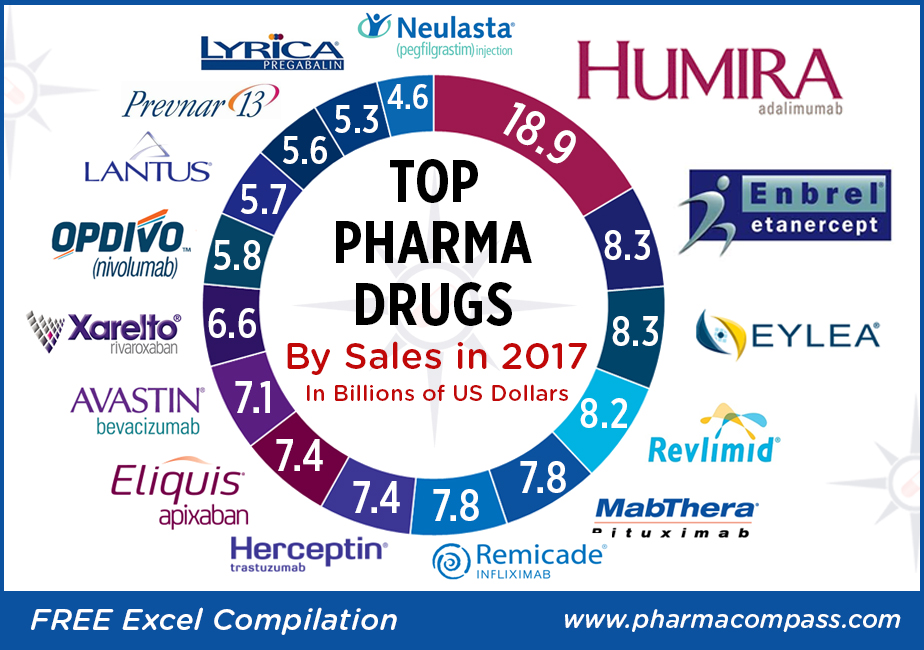 The year 2017 was a landmark year for pharmaceutical industries in the US and Europe, with a sharp increase in the number of new molecular entities (NMEs) being approved in both geographies.

The US Food and Drug Administration (USFDA) approved 46 NMEs in 2017, the second highest since 1996 when 53 NMEs were approved. In Europe, the European Medicines Agency (EMA) approved 35 drugs with a new active substance, up from 27 in 2016.

Sales for most major pharmaceutical companies continued to grow in 2017. Earnings forecasts for 2018 have been raised due to the recent US tax reform that has generated investor hopes for accelerated dividend growth and share buyback plans.

This week, PharmaCompass brings you a compilation of the top drugs of 2017 by sales revenue.

Top-sellers: Humira races ahead, despite launch of biosimilars; Enbrel a distant second

There wasn’t any upheaval at the top of the pharma drug sales charts. AbbVie’s anti-TNF (tumor necrosis factor) giant Humira (adalimumab), which is approved to treat psoriasis and rheumatoid arthritis, added almost another US $3 billion to its 2016 sales and posted nearly US $19 billion in revenues.

Last year, AbbVie’s raised expectations for Humira’s earnings to reach US $21 billion in global sales by 2020. The company believes this drug will continue to be a significant cash contributor until 2025 and the US $21 billion sales forecast by 2020 is about US $3 billion higher than its expectation two years ago.

In 2016, the US Food and Drug Administration (FDA) approved Amgen’s Amjevita (adalimumab-atto) — a biosimilar of Humira. And in 2017, another Humira biosimilar — Boehringer Ingelheim’s Cyltezo (adalimumab-adbm) — received approval from the FDA and European authorities.

Enbrel (etanercept), the longest-used biologic medicine for the treatment of rheumatism around the world, was the second best-selling drug with US $8.262 billion in 2017 sales.

The sales of the drug were down from US $9.366 billion in 2016 owing to lower selling prices and increased competition, which in turn hurt demand.

Since it was first approved in the United States in 1998, Enbrel has been approved in over 100 countries and the drug is promoted by Amgen, Pfizer and Takeda in different geographies.

Novartis’ biosimilar copy of Enbrel, which got approved by the FDA in August 2016 for the treatment of patients with rheumatoid arthritis (RA), plaque psoriasis, ankylosing spondylitis (AS) and other diseases is still not on the market because of a patent-protection challenge from Amgen.

Amgen is arguing in the US federal court that its drug has patent protection until 2029.

The company believes much of the recent growth in the US was driven by demographic trends with an aging population as well as an overall increase in the prevalence of diabetes.

These demographic trends are expected to continue in the coming years, providing an opportunity for continued growth.

Celgene’s Revlimid (lenalidomide) — a thalidomide derivative introduced in 2004 as an immunomodulatory agent for the treatment of various cancers such as multiple myeloma — brought in an additional US $1.2 billion in 2017 sales and had total revenues of US $8.187 billion.

Revlimid continues to contribute more than 60 percent to the company’s total sales of US $13 billion.

Celgene received a setback this month as the USFDA refused to consider Celgene’s application for ozanimod, an experimental treatment for relapsing multiple sclerosis. The treatment was being seen as a key to the company’s fortunes as Celgene had said ozanimod is worth US $4 billion to US $6 billion a year in peak sales.

Gilead Sciences’ blockbuster hepatitis C drugs franchise that includes Sovaldi and Harvoni continue to feel the competitive heat as they registered US $9.137 billion in 2017 sales, down from US $14.834 billion the previous year.

While reporting 2017 results, Gilead provided guidance for 2018 and said its sales of Hepatitis C drugs could fall further to US $3.5 billion - US $4 billion. At their peak in 2015, Gilead’s Sovaldi and Harvoni had together generated US $19.1 billion in sales.

One of the major reasons for this drop is AbbVie’s launch of its new treatment Mavyret at a deep price discount to the competition. AbbVie also claims to have the shortest treatment course at eight weeks, compared with 12 weeks or longer for other treatments.

Novartis’ Gleevec (imatinib), which had at one point become the best-selling drug for Novartis and had brought in US $3.323 billion for the company in 2016, started facing generic competition last year and the anti-cancer drug lost US $1.380 billion in sales to bring in ‘only’ US $1.943 billion last year.

The US patents of  Merck’s cardiovascular drugs — Zetia (Ezetimibe) and Vytorin (Ezetimibe and Simvastatin) — expired in April 2017. In May 2010, Merck and Glenmark Pharmaceuticals entered into an agreement that allowed Glenmark to launch a generic version of Zetia in late 2016. The drugs that had combined sales of US $3.701 billion in 2016 felt the generic heat in 2017 and the sales were US $1.606 billion lower at US $2.095 billion.

GSK’s Advair, which was expected to encounter generic competition in 2017, continued to breathe easy as the FDA found deficiencies in the applications of Hikma, Mylan and Sandoz. All three failed to get the FDA nod for their generic versions of Advair, a drug used in the management of asthma and chronic obstructive pulmonary disease that generated sales worth US $4.431 billion (£3.130 billion) in 2017.

Here is PharmaCompass’ compilation of the best-selling drugs of 2017. This is based on information extracted from annual reports and US Securities and Exchange Commission (SEC) filings of major pharmaceutical companies.

Image Credit : TOP PHARMA DRUGS BY SALES IN 2017 by PharmaCompass is licensed under CC BY 2.0