Top drugs by sales in 2016: Who sold the blockbuster drugs? 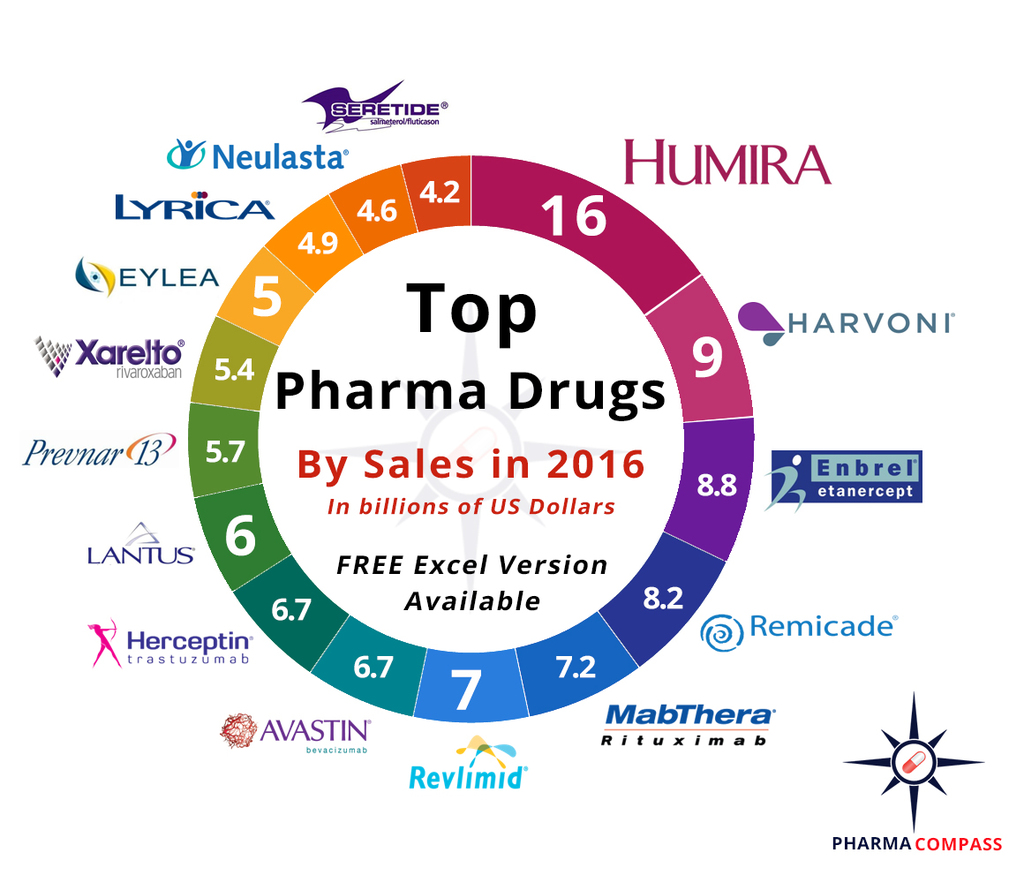 The year 2016 finished with a whimper insofar as mergers and acquisitions (M&As) were concerned. The preceding year — 2015 — had gone down in history as a record year for M&As in the pharmaceutical and biotech space, when deals worth US $300 billion were announced.

While drug companies were not as active on the M&A front, the product sales growth in 2016 continued to stay extremely robust and the order of the top ranked drugs changed little from the previous year.

This week, PharmaCompass brings you a compilation of the top drugs of 2016 by sales revenue.

Abbvie’s Humira (adalimumab) continued to remain the best-selling drug in the world and added another US $2 billion to its 2015 sales by generating record sales of US $16.078 billion in 2016.

Gilead’s Harvoni (ledipasvir and sofosbuvir), with record sales of US $13.864 billion in 2015, had a slightly muted performance in 2016 as sales fell to US $9.081 billion (a drop of US $4.783 billion). Gilead failed to maintain its initial rate of new prescriptions, and competition from Merck and AbbVie forced it to offer major discounts to health insurers.

While Gilead executives still believe there is lots of growth left in the hepatitis C market, this year Gilead will continue to face headwinds as Merck's new combination pill — Zepatier — entered the market with a list price at US $54,600 for a 12-week regimen, well below the US $94,500 for Harvoni.

Biological drugs, Enbrel (etanercept), Remicade (infliximab) and MabThera (rituximab), held onto their positions of 2015, although their combined sales increased a little over US $300 million.

This means that for yet another year, the four best-selling drugs in the world are from biological origin.

Celgene’s Revlimid (lenalidomide) — a thalidomide derivative introduced in 2004 as an immunomodulatory agent for the treatment of various cancers such as multiple myeloma — brought in US $5.8 billion in 2015, and grew another 20 percent this year, to US $6.974 billion. Revlimid now contributes more than 60 percent to the company's total sales of US $11.229 billion.

With almost identical sales of US $6.7 billion, Roche’s cancer treatments Herceptin and Avastin were also into the top 10 best selling drugs in 2016, making Roche have the most number of products, three of which made it to the list.

Against the backdrop of questions being raised about insulin pricing and possible collusion in the United States, Sanofi saw its insulin treatment Lantus (insulin glargine) drop from number six on the 2015 list to number 9 in 2016 as sales fell by US $717 million to a little over US $6 billion. Sanofi’s competitors in the diabetes space — Novo Nordisk and Eli Lilly — also registered a drop in their insulin sales.

In addition to the pricing pressure, Sanofi will continue to contend with Lilly and Boehringer Ingelheim’s FDA approved biosimilar of insulin glargine — Basaglar — which was approved in December 2015.

Basaglar is biologically similar to Sanofi’s Lantus and was announced at a price 15 percent lower than that of Lantus.

GSK’s Advair, which is preparing for generic competition in 2017, saw its sales drop 5 percent in British Pounds to £3,485. However, the dollar value was significantly lower in view of the fall in the Pound’s value after Brexit.

AstraZeneca’s Crestor (rosuvastatin calcium), Otsuka’s Abilify (aripiprazole) and Novartis’ Gleevec (imatinib) all saw their sales crash in 2016 as a result of generic onslaught. The three drugs together witnessed a combined sales drop of US $5.7 billion.

Here is PharmaCompass’ compilation of the best-selling drugs of 2016. This is based on information extracted from annual reports and US Securities and Exchange Commission (SEC) filings of major pharmaceutical companies.

Blockbusters in the making

With almost US $5 billion in sales, a 14 percent growth over the previous year, Pfizer’s Lyrica enjoyed its last year before generic competition enters the market as Generics (UK) Limited (Mylan) and Actavis Group PTC ehf won a patent challenge in the United Kingdom.

Lyrica generics are expected in the United States in late 2018.

As Abbvie’s Humira begins to face competition from Amgen, Abbvie’s US $21 billion buy of Pharmacyclics seems to be paying off. The Pharmacyclics buy was a way to get access to Imbruvica (ibrutinib), which generated total 2016 sales of US $3.083 billion — an increase of US $1.64 billion over the previous year.

Gilead and GSK’s combination HIV treatments — Genvoya and Triumeq — also reported sales increase of over a billion dollars each.

Image Credit : Top Pharma Drugs By Sales In 2016 by The PharmaCompass’ Team is licensed under CC BY 2.0