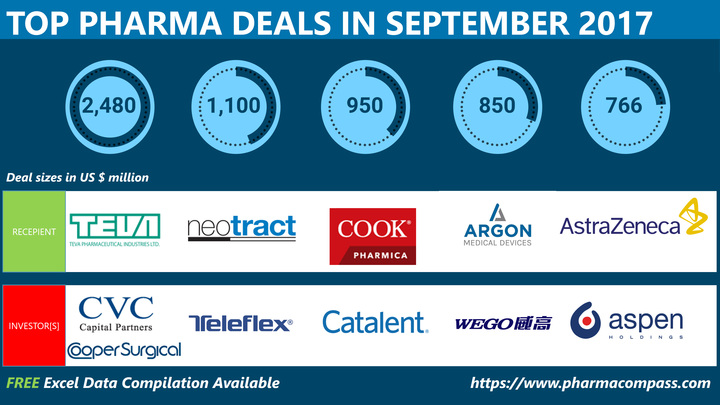 In our continuous endeavor to share business intelligence that can help grow your pharmaceutical business, PharmaCompass had introduced PharmaFlow last month — a monthly roundup of deals and investments from across the globe.

By tracking investments and M&As in the global pharmaceutical industry, we hope to provide our readers with an insight into the breakthrough technologies and business trends of the future.

In September, Teva continued to divest in order to reduce its US$ 35 billion debt burden incurred last year due to the acquisition of the generics division of Allergan. Meanwhile, the world of pharmaceuticals saw deals in the medical devices space, and the Chinese drug industry continued to expand its global footprint.

Debt-laden Teva Pharmaceuticals, the world’s leading generic drug manufacturer, continued to look for divestiture opportunities and sealed three separate divestments that together fetched US$ 2.48 billion. The Israeli drugmaker, which also got a new CEO (Kåre Schultz) last month, announced it would use the proceeds to repay its term loan debt.

Capital Partners Fund VI acquired a portfolio of products from Teva’s global women’s health business, spanning contraception, fertility, menopause and osteoporosis for US$ 703 million in cash. The portfolio of products, marketed and sold outside of the US, includes brands such as Ovaleap, Zoely, Seasonique, Colpotrophine and Actonel. Combined annual net sales of these and other products within this portfolio for 2016 were US$ 258 million.

Teva also entered into a definitive agreement with CooperSurgical, under which the latter will acquire Paragard (intrauterine copper contraceptive), a product within its global women’s health business, for US$ 1.1 billion cash. Paragard posted revenues of approximately US$ 168 million for the trailing 12 month period ending June 30, 2017. This transaction also includes the sale of Teva’s manufacturing facility in Buffalo, New York, which produces Paragard exclusively.

M&As in the next generation medical devices space

NeoTract acquires Teleflex: September also saw the acquisition of NeoTract by Teleflex Incorporated. NeoTract is a privately-held medical device company that has developed and commercialized the US FDA-cleared UroLift System — a novel, minimally invasive technology for treating lower urinary tract symptoms due to benign prostatic hyperplasia, or BPH. Performed primarily through a transurethral outpatient procedure, the UroLift System delivers permanent implants that hold open the urethra, reducing the prostate obstruction without cutting, heating, or removing prostate tissue. Teleflex saw significant potential in NeoTract’s technology and acquired the company in early September, in a transaction valued up to US$ 1.1 billion.

Under the terms of the agreement, Teleflex will acquire NeoTract for an upfront cash payment of US$ 725 million, and will pay up to an additional US$ 375 million upon the achievement of certain commercial milestones related to sales through the end of 2020.

In 2016, NeoTract reported 178 percent year-on-year growth as its revenues grew to US$ 51 million compared to approximately US$ 18 million in 2015.

Chinese companies carry on with their global acquisition spree

Shandong Weigao isn’t alone as according to Bloomberg data, Chinese companies had announced US$ 4.3 billion in US health-care deals until September, more than double the US$ 1.9 billion in purchases for the same period in 2016.

In June this year, Chinese contraceptives maker Humanwell Healthcare Group agreed to buy US-based RiteDose for about US$ 605 million by becoming a part of a joint stock company.

Fosun resurrects India deal: In September, Shanghai Fosun Pharmaceutical Group resurrected its deal to overcome concerns raised by the Indian government, by scaling down the stake it proposed to purchase in Gland Pharma from 86 percent to 74 percent. Fosun now proposes to pay US$ 1.1 billion for the 74 percent stake. The acquisition will give Fosun access to the Indian drugmaker’s portfolio of generic injectable medicines that are primarily exported to the US.

Zai Lab’s US IPO: Last month, China-based Zai Lab — a Chinese biotech focused on oncology, autoimmune and infectious diseases — raised US$ 150 million in its US IPO after the company increased the size of the offering to 8 million shares, from the originally proposed 5.8 million shares. Demand for the shares was strong, and Zai's stock opened 50 percent above the IPO price valuing the company at US$ 1.4 billion.

Aspen acquires another portfolio of drugs from Big Pharma

Last year, Italian antitrust authorities fined South Africa-based drugmaker Aspen Pharmacare nearly US$ 5.5 million for halting supplies of several cancer drugs. This was seen as a negotiating tactic designed to hike drug prices by as much as 1,500 percent.

The price-gouging episode began after Aspen purchased the drugs from GlaxoSmithKline. It then began negotiations with the Italian Medicines Agency over pricing for the cancer medicines. According to the Italian Competition Authority, Aspen also used the threat of a shortage to achieve the high prices it had sought, because the drugs temporarily disappeared from the market.

AstraZeneca had entered into an agreement with AGI in June 2016, under which AGI had gained exclusive commercialization rights to these medicines in markets outside the US. Under the terms of the new agreement, AGI will now acquire the remaining rights to the intellectual property and manufacturing know-how related to the anesthetic medicines for an upfront consideration of US$ 555 million. Additionally, AGI will pay AstraZeneca up to US$ 211 million in performance-related milestones based on sales and gross margin during the period September 1, 2017 to November 30, 2019.

Another CDMO — Avara Pharmaceutical Services — had acquired a Pfizer facility in Italy in August. Last month, Avara entered into an agreement with GSK to acquire a GSK  consumer healthcare manufacturing facility in Aiken, South Carolina. The terms of the agreement were not disclosed.

Our technology of the month for August 2017 — CAR-T therapy for cancer — got another boost as Gilead (which had acquired Kite Pharma for US$ 11.9 billion in August) received approval last week for Kite’s most advanced CAR-T therapy candidate — axicabtagene ciloleucel (axe-cel). Gilead has announced a price significantly lower than the launch price at which Novartis is selling its CAR-T treatment (Kymriah).

While the man who led CAR-T therapy program at Novartis — Vasant Narasimhan — went on to become the Swiss drugmaker’s CEO last month, its ex-CEO Joe Jimenez told Forbes magazine in an interview that he is “ready to return to Silicon Valley.”

In his interview, Jimenez, 57, indicated what he thought he could be doing next.

“When I think of what really excites me, it’s where biology comes together with technology, like when you think about what’s happening right now in the Valley in California,” Jimenez said.

According to the interview, Jimenez is not ruling out joining another big company. He is fascinated by more entrepreneurial startups, and “sees an opportunity for those who understand healthcare to bridge the gap between brilliant techies and a broken system”.

He got a glimpse of this potential, he says, from Novartis’ efforts with Verily, the life sciences arm of Alphabet (formerly Google). The companies have been working on smart ocular devices, a contact lens that can monitor the sugar levels of diabetics through their tears. Jimenez says there is a prototype of this lens, which showed him that engineering could benefit from healthcare knowhow.

Our view is that large pools of capital combined with the finest talent would certainly lead to some breakthrough technologies in the pharmaceutical industry in the near future. Watch this space for more.

Image Credit : Pharma Deals, Investments and M&As in September 2017 by PharmaCompass is licensed under CC BY 2.0