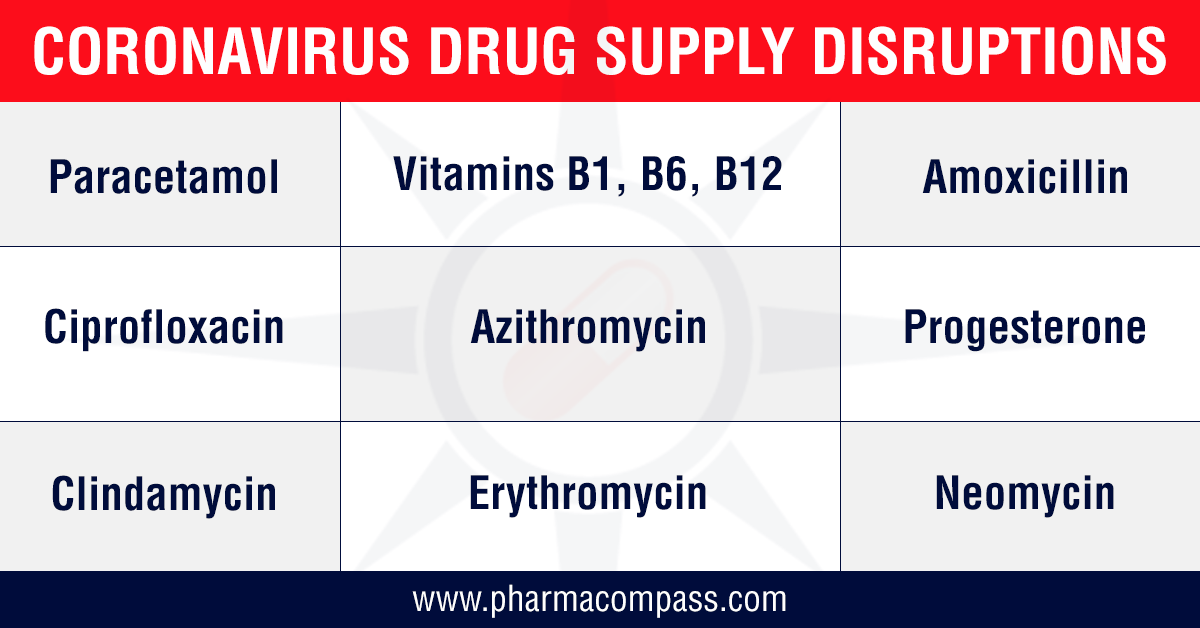 Now that it has been established that the novel coronavirus is going to globally impact the drug supply chain, it becomes imperative to analyze the extent of the impact.

Drug shortages are for real

Last week, the US Food and Drug Administration (FDA) announced the first human drug shortage as a result of the coronavirus outbreak. In addition, the FDA announced it was tracking 20 drugs that could face shortages. Some generic drugmakers are predicting shortages as early as in June or July, due to the novel coronavirus.

The FDA did not disclose the name of the drug in shortage or the 20 drugs it is tracking, as this is considered ‘confidential commercial information’.

In India, a committee constituted by the country’s Department of Pharmaceuticals started monitoring the availability of 58 active pharmaceutical ingredients (APIs) to take preventive measures against illegal hoarding and black-marketing in the country.

According to a report published in The Economic Times, after reviewing the list of drugs, 34 were found to have no alternatives which include critical and essential drugs like potassium clavulanate, ceftriaxone sodium sterile, piperacillin tazobactam, meropenem, vancomycin, gentamycin and ciprofloxacin.

This was immediately followed by the Indian government restricting the exports of 13 APIs along with some of their finished formulations. The list includes paracetamol, tinidazole, metronidazole, acyclovir, vitamin B1, vitamin B6, vitamin B12, progesterone, chloramphenicol and neomycin. For most of the products on this list, India is a net importer, as there is little domestic manufacturing of these APIs.

The decline in industrial activity in China is certainly taking its toll, as drugs which are on the World Health Organization’s Model list of Essential Medicines are beginning to face significant price increases in the wake of disruption of key starting raw materials for bulk drugs.

The export restriction out of India on commonly used analgesic, Paracetamol — sold under the brand names such as Tylenol (in the US), Panadol (in the UK), Dafalgan (France) and Crocin (India) — is not surprising as the API has witnessed almost doubling of prices in less regulated markets because exports of its key building block para-amino phenol (PAP) have dramatically reduced from China.

By the end of February, their inventory stockpiles had halved and in the event of a continued supply disruption, their entire inventory pipeline is likely to dry out. In addition, Chinese paracetamol manufacturers, who export a significant amount of their bulk ingredient production globally, including to India, are also currently unable to export. This is beginning to create the potential of panic among sourcing executives across the world.

While paracetamol was listed on the API watch list circulated by India’s Department of Pharmaceuticals, our survey has revealed that other products on the list like ciprofloxacin, amoxicillin and azithromycin are also facing severe raw material shortages. As a result, the prices of these bulk drugs have also increased sharply.

In a statement to The Economic Times, leading Indian generic manufacturer Mankind Pharma’s chairman and managing director said amoxicillin is the most commonly used API to manufacture antibiotics and the company has invested Rs 1 billion (US$ 14 million) in placing irregular orders with vendors to try and address the potential shortage that is expected. He went on to say that if the situation continues until April, there will be an acute shortage.

In a statement to the US House of Representatives last October, Janet Woodcock, the FDA’s Director of Center of Drug Evaluation and Research, said the FDA has determined that there are three WHO Essential Medicines whose API manufacturers are based only in China. The three medicines are: capreomycin, streptomycin (both indicated to treat Mycobacterium tuberculosis) and sulfadiazine (used to treat chancroid and trachoma).

Streptomycin is also on the watch list published by India’s Department of Pharmaceuticals along with commonly used anti-hypertensives like losartan, valsartan, telmisartan and olmesartan and diabetes treatment metformin.

PharmaCompass’ discussions have also revealed that in many cases while API manufacturing factories in China have returned to work, there are disruptions in the availability of raw materials and/or logistics at sea ports and airports which have led to unavailability of supplies.

While the FDA has a list of the number of API facilities in China which are in a position to supply to the United States, Woodcock said in her statement that the FDA “cannot determine with any precision the volume of API that China is actually producing, or the volume of APIs manufactured in China that is entering the US market.”

This visibility reduces drastically when one has to assess the dependence of each API manufacturer around the world on China for intermediates. Our discussions have revealed that it is these intermediates which are becoming a problem for most API manufacturers, even those based in India.

It was worth highlighting that a manufacturing process change at an intermediate stage of commonly used blood pressure medicine valsartan resulted in the recall of millions of pills as it was found to contain a cancer causing impurity above acceptable levels. Similarly, in 2008, the adulteration of heparin in China, which killed 81 people and left 785 severely injured, was an outcome of the subcontracting of precursor chemicals of Heparin.

The restrictions imposed on industrial activity and transportation in China in the first two months of this year has resulted in NASA’s satellite images showing a decline in pollution levels over China.

While China works towards getting its industrial and transportation engine up and running to 2019 levels, the outbreak has spread to other countries which will further increase the demand for drugs to fight the virus.

This is a time when the pharmaceutical industry needs to act responsibly and make decisions which are in the best interests of patients globally.

Sharing information is one such step — it will allow for drug stockpiles and inventories that exist to be re-distributed to areas which need them most. For, in the event of an urgent need, drugs will become available to those who are most in need.

Image Credit : CORONAVIRUS DRUG SUPPLY DISRUPTIONS by PharmaCompass is licensed under CC BY 2.0