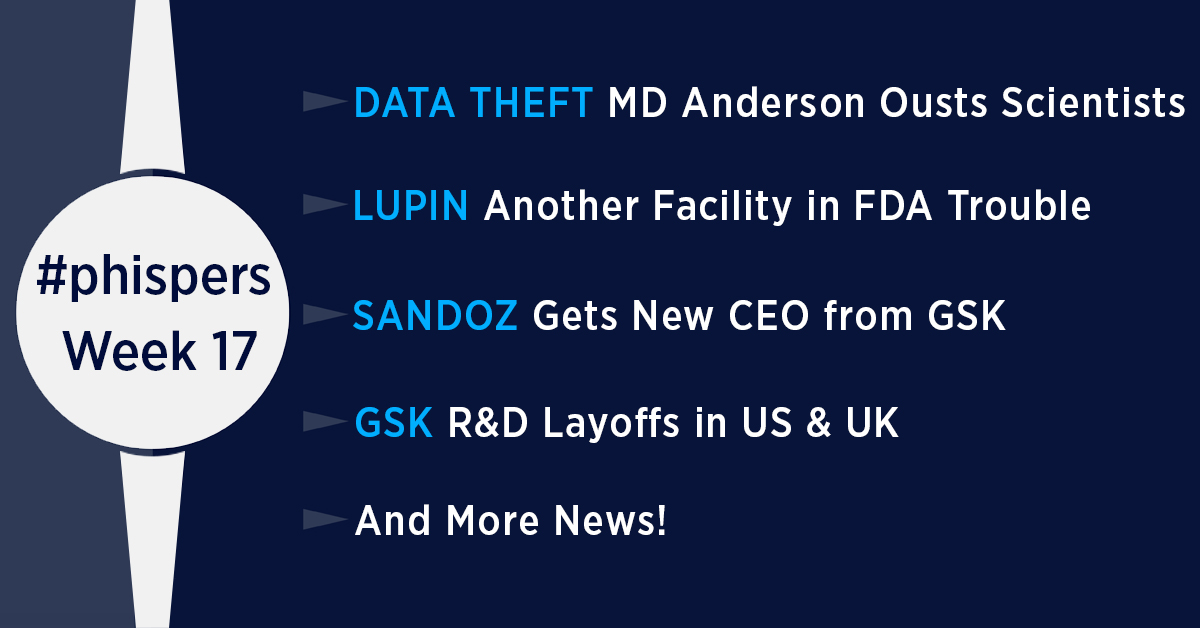 Another plant of Indian drugmaker Lupin received an OAI letter from the USFDA.

A report by IQVIA highlights the changes in the clinical development process and shares that emerging biopharma companies account for 72 percent of all late-stage pipeline activity.

In the US, drug companies’ spend on lobbying nearly touched the record in the first quarter of this year, owing to pressure exerted by the Trump administration to lower drug prices.

Meanwhile, GSK is planning to layoff staff at its R&D hubs in the US and UK. And Novartis appointed a new CEO — Richard Saynor— who has been poached from GSK.

Last year in November, we had reported on how four former Genentech employees in the US were indicted by a federal grand jury for the alleged theft of company trade secrets in order to help a company in Taiwan — JHL Biotech, Inc — develop drugs similar to those made by the Roche subsidiary.

Last week, three scientists were ousted from the MD Anderson Cancer Center due to similar concerns. The cancer center moved to fire the scientists after the National Institutes of Health (NIH) contacted at least 55 medical research institutions to report the names of researchers suspected of sharing federally-funded research with China or other foreign governments.

The NIH told MD Anderson officials it had concerns about a total of five researchers. Two of them resigned ahead of termination proceedings, and the third is challenging the dismissal, the NIH said. A fourth was reprimanded but not terminated. One other MD Anderson researcher is still under investigation, according to the NIH.

Last year, MD Anderson had received emails from the NIH describing conflicts of interest or unreported foreign income by five faculty members. The NIH, which has been assisted by the FBI, gave the cancer center 30 days to respond.

The cancer center’s action comes amid growing concern in the US over China and other foreign governments exploiting US-funded research for their own benefit.

Another Lupin facility gets classified as an OAI; may face regulatory action

A month back, PharmaCompass had reported on two of Indian drugmaker Lupin Ltd’s manufacturing sites — one in India (Mandideep, Unit 1) and the other in the US (Somerset, New Jersey) — receiving ‘Official Action Indicated’ (OAI) letters from the US Food and Drug Administration (FDA).

An OAI letter means the facilities are considered to be in an unacceptable state of compliance with regard to current good manufacturing practice (cGMP).

This week, there is news that the company has received a letter from the FDA classifying the inspection conducted at its Pithampur (Indore) Unit-2 facility in January 2019 as Official Action Indicated (OAI), Lupin said in a regulatory filing.

The Form 483 issued to the facility had highlighted  concerns over Lupin’s handling of OOS results. This has been a recurring problem at Lupin’s operations over the past few years. The FDA may withhold approval of any pending applications or supplements in which this facility is listed.

However, the company said it does not believe that the classification would have an impact on disruption of supplies or the existing revenues from operations of this facility. The company is in the process of sending further updates of its corrective actions to the USFDA and is hopeful of a positive outcome, it added.

IQVIA is a leading global provider of advanced analytics, technology solutions and contract research services to the life sciences industry.

Emerging biopharma companies account for 72 percent of all late-stage pipeline activity, up from 61 percent a decade ago, the report said.

In this new report, titled The Changing Landscape of Research and Development: Innovation, Drivers of Change, and Evolution of Clinical Trial Productivity, IQVIA has put forth a proprietary Clinical Development Productivity Index that reflects changes in trial complexity, success and duration.

Using this index, the report takes a 10-year historical view of these metrics and recasts the data with a future perspective that identifies critical productivity changes expected through 2023.

The report identifies key drivers that are having a quantitative impact on clinical development at a therapy area level. These include digital health technology, patient-reported outcomes, real-world data, predictive analytics and artificial intelligence and biomarker testing.

“As advances in science, technology and data gradually find application within clinical development, the length of time that trials take to complete, the resources required due to trial complexity and likelihood of trial success are all shifting, with impacts varying by therapy area,” said Murray Aitken, IQVIA’s senior vice president.

GSK to layoff R&D staff in UK, US due to rethink on its drug development ops

British drug major GlaxoSmithKline’s new R&D chief Hal Barron has made clear his interest in refocusing the group R&D. And this focus is beginning to play out with impending layoffs in GSK’s big R&D center in Stevenage (UK) and its second big R&D hub near Philadelphia (US).

In a statement issued last week, GSK said a “small number” of roles would be affected by the layoffs in Stevenage. “We have identified where changes are necessary to ensure we can fully support our evolving pipeline priorities. We anticipate a small number of roles will be directly impacted by these changes but continue to expect GSK’s R&D operations to grow overall with increased investment.”

However, an Endpoints News story said GSK will extend the layoffs to Upper Providence in Pennsylvania. According to the article, Barron is axing some 240 to 250 staffers in Upper Providence and Stevenage. “That includes a heavy concentration on chemists, including a few senior chemists in the group. Some administrative staffers are also getting hit,” the report said.

The US President Donald Trump and the US Congress are putting unprecedented pressure on drug companies to lower the price of drugs. As a result, the pharmaceutical industry’s primary trade group in the US spent US$ 9.91 million in the first quarter of 2019 on lobbying.

The industry’s trade group — Pharmaceutical Research and Manufacturers of America (PhRMA) — which represents 37 drug companies, spent US$ 9.91 million in the first quarter, up from US$ 6.03 million during the last quarter of 2018. The amount spent last quarter is marginally short of PhRMA’s record a year earlier.

The Trump administration has proposed new rules and approved a slew of new generic drugs, sending a strong signal that more ambitious changes may be needed to lower drug prices for Americans. This has spurred drugmakers to reveal prices of their prescription drugs on websites for the first time in a bid to avoid being forced to make even more public disclosures in TV ads.

Companies like AbbVie, AstraZeneca, Bayer, Biogen, Bristol-Myers Squibb, Merck, Novartis, Pfizer and Sanofi augmented their first-quarter spending compared with the fourth quarter of 2018. Novartis hiked its spend by a whopping 450 percent — from US$ 580,000 to US$ 3.2 million.

Recently, two of the world’s biggest insulin producers (Eli Lilly and Sanofi) began offering bigger discounts, prompting the Congress to call for more action. They also criticized the companies for waiting for so long before offering discounts.

Last month, we had reported on Richard Francis stepping down as the CEO of Sandoz. He had said he is unable to “commit to (Sandoz’s) multi-year journey”.

While one Richard put in his papers, Novartis CEO Vas Narasimhan brought in another Richard to take his place. Narasimhan has tapped a GSK digital lead — Richard Saynor — to take over as CEO of Sandoz by August 1, 2019. Saynor is currently senior vice president of classic and established products as well as commercial and digital platforms at GSK.

Saynor will be seeing through Sandoz’s “multi-year transformation” that focuses on turning the generic player into a standalone unit within Novartis. This transformation is targeted at giving Sandoz “the right capabilities and the right freedom to operate in order to be successful,” Narasimhan said last week. Saynor’s appointment also fits into Narasimhan’s larger digital ambitions for Novartis.

The new chief is no stranger to Sandoz—he once held commercial leadership roles at the generics unit and oversaw its expansion in Asia, Latin America and Turkey.

Saynor will also become a member of Novartis’ executive committee. However, his appointment may not be enough to stop rumors that Novartis is considering offloading Sandoz, which posted declining sales during the latest quarter. The group has already spun off the Alcon eye-care business and is largely focusing on innovative drugs.