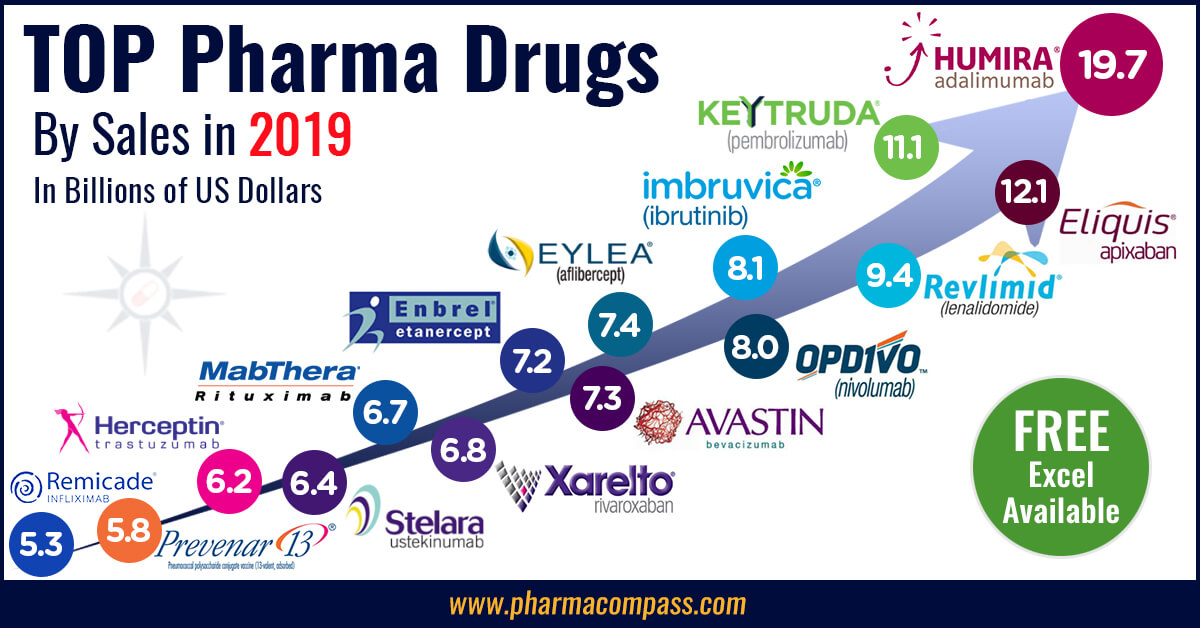 Top drugs and pharmaceutical companies of 2019 by revenues

Acquisitions and spin-offs dominated headlines in 2019 and the tone was set very early with Bristol-Myers Squibb acquiring New Jersey-based cancer drug company Celgene in a US$ 74 billion deal announced on January 3, 2019. After factoring in debt, the deal value ballooned to about US$ 95 billion, which according to data compiled by Refinitiv, made it the largest healthcare deal on record.

In the summer, AbbVie Inc, which sells the world’s best-selling drug Humira, announced its acquisition of Allergan Plc, known for Botox and other cosmetic treatments, for US$ 63 billion. While the companies are still awaiting regulatory approval for their deal, with US$ 49 billion in combined 2019 revenues, the merged entity would rank amongst the biggest in the industry.

Pfizer continued to lead companies by pharmaceutical sales by reporting annual 2019 revenues of US$ 51.8 billion, a decrease of US$ 1.9 billion, or 4 percent, compared to 2018. The decline was primarily attributed to the loss of exclusivity of Lyrica in 2019, which witnessed its sales drop from US$ 5 billion in 2018 to US$ 3.3 billion in 2019.

In 2018, Pfizer’s then incoming CEO Albert Bourla had mentioned that the company did not see the need for any large-scale M&A activity as Pfizer had “the best pipeline” in its history, which needed the company to focus on deploying its capital to keep its pipeline flowing and execute on its drug launches.

Bourla stayed true to his word and barring the acquisition of Array Biopharma for US$ 11.4 billion and a spin-off to merge Upjohn, Pfizer’s off-patent branded and generic established medicines business with Mylan, there weren’t any other big ticket deals which were announced.

The Upjohn-Mylan merged entity will be called Viatris and is expected to have 2020 revenues between US$ 19 and US$ 20 billion and could outpace Teva to become the largest generic company in the world, in term of revenues.

Novartis, which had followed Pfizer with the second largest revenues in the pharmaceutical industry in 2018, reported its first full year earnings after spinning off its Alcon eye care devices business division that had US$ 7.15 billion in 2018 sales.

In 2019, Novartis slipped two spots in the ranking after reporting total sales of US$ 47.4 billion and its CEO Vas Narasimhan continued his deal-making spree by buying New Jersey-headquartered The Medicines Company (MedCo) for US$ 9.7 billion to acquire a late-stage cholesterol-lowering therapy named inclisiran.

As Takeda Pharmaceutical Co was busy in 2019 on working to reduce its debt burden incurred due to its US$ 62 billion purchase of Shire Plc, which was announced in 2018, Novartis also purchased the eye-disease medicine, Xiidra, from the Japanese drugmaker for US$ 5.3 billion.

Novartis’ management also spent a considerable part of 2019 dealing with data-integrity concerns which emerged from its 2018 buyout of AveXis, the gene-therapy maker Novartis had acquired for US$ 8.7 billion.

The deal gave Novartis rights to Zolgensma, a novel treatment intended for children less than two years of age with the most severe form of spinal muscular atrophy (SMA). Priced at US$ 2.1 million, Zolgensma is currently the world’s most expensive drug.

However, in a shocking announcement, a month after approving the drug, the US Food and Drug Administration (FDA) issued a press release on data accuracy issues as the agency was informed by AveXis that its personnel had manipulated data which the FDA used to evaluate product comparability and nonclinical (animal) pharmacology as part of the biologics license application (BLA), which was submitted and reviewed by the FDA.

With US$ 50.0 billion (CHF 48.5 billion) in annual pharmaceutical sales, Swiss drugmaker Roche came in at number two position in 2019 as its sales grew 11 percent driven by its multiple sclerosis medicine Ocrevus, haemophilia drug Hemlibra and cancer medicines Tecentriq and Perjeta.

Roche’s newly introduced medicines generated US$ 5.53 billion (CHF 5.4 billion) in growth, helping offset the impact of the competition from biosimilars for its three best-selling drugs MabThera/Rituxan, Herceptin and Avastin.

In late 2019, after months of increased antitrust scrutiny, Roche completed its US$ 5.1 billion acquisition of Spark Therapeutics to strengthen its presence in gene therapy.

Last year, J&J reported almost flat worldwide sales of US$ 82.1 billion. J&J’s pharmaceutical division generated US$ 42.20 billion and its medical devices and consumer health divisions brought in US$ 25.96 billion and US$ 13.89 billion respectively.

Since J&J’s consumer health division sells analgesics, digestive health along with beauty and oral care products, the US$ 5.43 billion in consumer health sales from over-the-counter drugs and women’s health products was only used in our assessment of J&J’s total pharmaceutical revenues. With combined pharmaceutical sales of US$ 47.63 billion, J&J made it to number three on our list.

While the sales of products like Stelara, Darzalex, Imbruvica, Invega Sustenna drove J&J’s pharmaceutical business to grow by 4 percent over 2018, the firm had to contend with generic competition against key revenue contributors Remicade and Zytiga.

US-headquartered Merck, which is known as MSD (short for Merck Sharp & Dohme) outside the United States and Canada, is set to significantly move up the rankings next year fueled by its cancer drug Keytruda, which witnessed a 55 percent increase in sales to US$ 11.1 billion.

Merck reported total revenues of US$ 41.75 billion and also announced it will spin off its women’s health drugs, biosimilar drugs and older products to create a new pharmaceutical company with US$ 6.5 billion in annual revenues.

The firm had anticipated 2020 sales between US$ 48.8 billion and US$  50.3 billion however this week it announced that the coronavirus  pandemic will reduce 2020 sales by more than $2 billion.

AbbVie’s acquisition of Allergan comes as the firm faces the expiration of patent protection for Humira, which brought in a staggering US$ 19.2 billion in sales last year for the company. AbbVie has failed to successfully acquire or develop a major new product to replace the sales generated by its flagship drug.

In 2019, Humira’s US revenues increased 8.6 percent to US$ 14.86 billion while internationally, due to biosimilar competition, the sales dropped 31.1 percent to US$ 4.30 billion.

Bristol Myers Squibb’s Eliquis, which is also marketed by Pfizer, maintained its number two position and posted total sales of US$ 12.1 billion, a 23 percent increase over 2018.

While Bristol Myers Squibb’s immunotherapy treatment Opdivo, sold in partnership with Ono in Japan, saw sales increase from US$ 7.57 billion to US$ 8.0 billion, the growth paled in comparison to the US$ 3.9 billion revenue increase of Opdivo’s key immunotherapy competitor Merck’s Keytruda.

Keytruda took the number three spot in drug sales that previously belonged to Celgene’s Revlimid, which witnessed a sales decline from US$ 9.69 billion to US$ 9.4 billion.

Cancer treatment Imbruvica, which is marketed by J&J and AbbVie, witnessed a 30 percent increase in sales. With US$ 8.1 billion in 2019 revenues, it took the number five position.

This year has been dominated by the single biggest health emergency in years — the novel coronavirus (Covid-19) pandemic. As drugs continue to fail to meet expectations, vaccine development has received a lot of attention.

US-based Merck’s vaccine division also reported a significant increase in sales to US$ 8.0 billion and in 2019 received FDA and EU approval to market its Ebola vaccine Ervebo. This is the first FDA-authorized vaccine against the deadly virus which causes hemorrhagic fever and spreads from person to person through direct contact with body fluids.

Pfizer and Sanofi also reported an increase in their vaccine sales to US$ 6.4 billion and US$ 6.2 billion respectively and the Covid-19 pandemic has recently pushed drugmakers to move faster than ever before and has also converted competitors into partners.

In a rare move, drug behemoths  — Sanofi and GlaxoSmithKline (GSK) —joined hands to develop a vaccine for the novel coronavirus.

Covid-19 has brought the world economy to a grinding halt and shifted the global attention to the pharmaceutical industry’s capability to deliver solutions to address this pandemic.

This could well explain the limited range of options currently available to fight Covid-19. With the pandemic currently infecting over 3 million people spread across more than 200 countries, we can safely conclude that the scenario in 2020 will change substantially. And so should our compilation of top drugs for the year.

Image Credit : Top Pharma Drugs By Sales in 2019 by PharmaCompass is licensed under CC BY 2.0