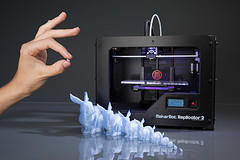 Recently the USFDA approved Aprecia Pharma’s SPRITAM® levetiracetam – a drug for epilepsy treatment manufactured by 3D printing. This approval should encourage other players to pursue drug development with renewed vigor.


Last week saw a revolutionary approval from the US Food and Drug Administration (USFDA). For the first time, the USFDA approved a drug manufactured by three dimensional printing (3DP) – Aprecia Pharmaceuticals received the USFDA approval of epilepsy treatment SPRITAM® levetiracetam. Leveitracetam was first approved in 1999.

Aprecia gained the exclusive licence to 3DP technology from MIT in the late 1980s, and by 2007 it began developing its proprietary ZipDose technology. But SPRITAM is revolutionary, not just because it is 3D printed, but for other reasons as well. SPRITAM® is a porous formulation that rapidly disintegrates with a sip of liquid. The dispersion is significantly superior to a conventional over the counter fast-melt tablet (watch the video: https://www.aprecia.com/zipdose-platform/zipdose-technology.php).

In fact, the drug is designed to dissolve in the tongue (rather than swallowed as a whole). The patient experience is enhanced since SPRITAM delivers an extremely high drug load, up to 1,000 mg in a single dose. No measuring is needed as each dose is individually packaged, making it easy to carry this treatment on the go.

3D printers are not even expensive

For those not familiar with 3DP (or additive manufacturing), it is a process used to make a three-dimensional object without the use of dies, molds or machining. Instead, additive processes are used, in which successive layers of material are laid down under computer control (watch the video: https://www.youtube.com/watch?v=G0EJmBoLq-g). These objects can often be of virtually any shape or geometry, and are produced from a 3D model or another electronic data source. A 3D printer is a type of industrial robot, and can range from small scale consumer models to large factory units.

Now for the moot question – why are pharmaceutical companies not developing drugs with 3D printing? In fact, 3D printers are inexpensive, and the ingredients used to produce the drugs are the same that are currently being used and there are multiple candidates, other than those Aprecia is working on which would benefit from this technological revolution.

Making 3D printed drugs is really not that complicated or expensive. A recently published paper by researchers at the University College of London (UCL), “Effect of geometry on drug release from 3D printed tablets” produced different shaped tablets using 3D printing which would be otherwise difficult to produce using traditional methods.

The researchers simply purchased water-soluble PVA filament from MakerBot (not currently available but other PVA filaments are available on Amazon for under US $ 50), along with widely used pain reducer and fever reliever, Paracetamol (also known as Acetaminophen) and salts. They cut the filament into small pieces (approximately 2mm in length), basically turning the spool of filament into pellets. This was followed by mixing in the Paracetamol, and extruding the mixture from a Filabot filament extruder (it costs US $ 949) at 180 degrees C. What came out of the printer was a 3D printed drug.

Staying focused on opportunities where an extremely high drug load – up to 1,000 mg – has to be delivered in a single dose we ran a search on the PharmaCompass database to find a few potential candidates for 3D printing.

In addition to these products, there are multiple other possibilities which can get created by producing combination drugs using 3D printing.

With nearly three million people in the United States diagnosed with active epilepsy, Aprecia Pharmaceuticals’ revolutionary form of Levetiracetam clearly has a very large market need to address. However, the problem with 3D printing is that it is exceptionally slow when compared with conventional production methods for tablets.

Anticipating the problems, Aprecia Pharmaceuticals announced on Feb. 23, 2015, that the company will open a new manufacturing facility in Ohio that will use its powder–liquid three-dimensional printing (3DP) technology.

With plans to invest $25 million in a 190,000-ft2 facility, the new facility will be in addition to the company's existing manufacturing and R&D facility in New Jersey.

In the healthcare industry, 3D printers are used by dentists to create replicas of jaws and teeth as well as some finished dental implants and orthopedic surgeons have tested them to make customized hip replacements.

In 2012, a two-year-old girl in Illinois, born without a trachea, received a windpipe built with her own stem cells.

The current way of consuming tablets can definitely undergo a serious overhaul. With 3D printing technology rapidly evolving and already inexpensive, there is little reason for the industry not to pursue this area of drug development with greater vigor.

In addition, if we can measure our blood sugar levels using diagnostic kits at home, is it unrealistic to imagine a day when we’ll start printing our own medicines in 3D?