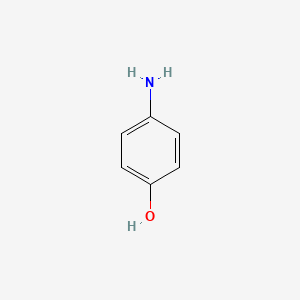 Chemical agents that increase the rate of genetic mutation by interfering with the function of nucleic acids. A clastogen is a specific mutagen that causes breaks in chromosomes. (See all compounds classified as Mutagens.)

An absorption and excretion study of permanent hair dye intermediates containing 14-C was conducted in hairless Wistar rats under conditions of oxidation hair dyeing (ie, intermediates were mixed with H202 immediately before application). The cutaneous penetration of 14C-4-aminophenol (PAP) alone and in admixture with a nonradioactive coupler (3-amino-6-methylphenol, a 3-aminophenol (MAP) derivative) and that of the resultant 14C-indamine (N-[4-hydroxyphenyl}-3-amino-6-methyl benzoquinone imine) was determined. Hair dye solutions containing uniformly labeled PAP (0.75% or 70 nM) in a simple vehicle were applied to a 10 sq cm dorsal surface of up to 5 rats. Doses of PAP of 0.14 uM/sq cm, 0.69 uM/sq cm, and 3.44/ uM/sq cm yielded respective concentrations of 15.9 +/- 4.76 nM/sq cm, 52.04 +/- 6.73 nM/sq cm, and 58.4 +/- 11.5 nM/sq cm, which penetrated the skin and were detected in the excreta, the viscera, and the skin (excluding PAP found at the site of application) of the treated rats after 4 days. At the highest 14C-PAP concentration applied, the total quantity of 14C-PAP detected per sq cm of skin was approximately the same for PAP alone as for PAP mixed with nonradioactive MAP coupler (56.8 +/- 4.0 nM/sq cm). Penetration of the 14C-indamine was approximately 17 times less (3.6 +/- 0.46 nM) than that of PAP or of the mixture of PAP with the nonradioactive coupler..

... Hepatocytes prepared from male Sprague-Dawley rats ... converted para-aminophenol (PAP) to two major metabolites (PAP-GSH conjugates and PAP-N-acetylcysteine conjugates) and several minor metabolites [PAP-O-glucuronide, acetaminophen (APAP), APAP-O-glucuronide, APAP-GSH conjugates, and 4-hydroxyformanilide]. Preincubating hepatoyctes with 1-aminobenzotriazole, an inhibitor of cytochromes P450, did not alter the pattern of PAP metabolism. In conclusion, we found that PAP was metabolized in hepatocytes predominantly to PAP-GSH conjugates and PAP-N-acetylcysteine conjugates in sufficient quantities to account for the nephrotoxicity of PAP. PubMed Abstract

4-Aminophenol in the presence of oxyhemoglobin forms numerous adducts with glutathione (GSH). Using (14)C-4-aminophenol and (3)H-glutathione, ten different thioethers were isolated, by HPLC, with isotope ratios of 1:1, 1:2, 1:3, respectively ... In erythrocytes of humans and dogs, and in dog blood, in vivo, the same pattern of 4-aminophenol conjugates with GSH was found. In vivo, 5% of administered 4-aminophenol is converted into thioethers within erythrocytes, accompanied by a 60% decrease in the cellular GSH, indicating the role of erythrocytes in the biotransformation of xenobiotics. PubMed Abstract

4-Aminophenol (PAP) was conjugated at the phenolic group with sulfate or glucuronic acid. PAP may also be N-acetylated to N-acetyl-p-aminophenol (APAP), also known as acetaminophen (Tylenol). Subcutaneous doses of PAP-HCI (0-400 mg/kg) given to Fischer 344 and Sprague-Dawley rats were metabolized to acetylates, sulfates, glucuronides, and other conjugates of both PAP and its metabolite APAP.

The metabolism of 4-Aminophenol (PAP) was studied in vitro using a clonal strain of rat hepatoma cells (MH1C1). The rate of PAP disappearance was directly related to substrate concentrations, which were between 0.25 mM and 0.75 mM PAP, and incubation times up to 5 hr. The PAP glucuronide appearance rate versus time curve reportedly never reached linearity due to a reaction lag that increased with increasing substrate concentrations, indicating the possible existence of other PAP metabolizing pathways with different substrate optima. The highest rate of PAP-glucuronide formation was at a PAP concentration of 0.5 mM, decreasing at higher concentrations, indicative of possible substrate inhibition of various steps in glucuronidation (eg, uptake, transport, enzymatic coupling). The amount of glucuronide formed per amount of PAP disappearing by the MH1C1 rat hepatoma cells was higher than that formed by R5 clonal rat fibroblast cells (87.7% versus 40%, respectively in umol/mg cell protein/hr). The Chang cell line derived from human liver tissue did not produce any PAP-glucuronide although some of the substrate disappeared.

p-Aminophenol is considered a minor nephrotoxic metabolite of acetaminophen in humans. Long-term use of acetaminophen can result in an increased lipofuscin deposition in kidneys. In vitro studies have demonstrated that p-aminophenol can undergo oxidative polymerization to form melanin, a component of soluble lipofuscin. Hemolysis accompanies this process in whole blood. Long-term excessive use of phenacetin or acetaminophen has been associated with chronic renal disease, hemolytic anemia, and increased solid lipofuscin deposition in tissues ... .

The metabolic capacity of rat brain slices for m-dinitrobenzene (m-DNB) was assessed. ... The m-DNB was metabolized in the brain tissues & the liver tissue. ... Metabolic disposal of m-DNB was 1.05+/-0.11 micromoles/gram (micromol/g) wet weight/hr in the liver, 0.49+/-0.05micromol/g wet weight/hr in brain stem, & 0.44+/0.05micromol/g wet weight/hr in the forebrain. The main metabolite produced by both brain & liver slices was m-nitroaniline, which represented 57 to 66% of the disposal of m-DNB. In the liver, 2-aminophenol, 4-aminophenol, 4-nitrophenol, or 2-nitrophenol was produced, but they were not detected in the brain slices. Nitrosonitrobenzene was detected in slices from both parts of the brain, but not in the liver slices. ... The brain has considerable nitroreductive capacity towards m-DNB & in-situ reduction of m-DNB may be responsible for its neurotoxicity. PubMed Abstract

The in vitro enzymatic metab of N-nitroso-N-methylaniline (NMA) was investigated using cytochromes P450 2B1 & P450 2B2, isolated from liver microsomes of rats pretreated with phenobarbital (PB), reconstituted with NADPH-cytochrome P450 reductase & dilauroylphosphatidylcholine. Formaldehyde is produced by both cytochromes P450 (P450). NMA is a better substrate for P450 2B1 than for P450 2B2. ... Beside formation of formaldehyde, aniline & p-aminophenol (p-AP) are found to be metabolites formed from NMA by both P450 isoenzymes. ... PubMed Abstract

The demethylation of N-nitrosodimethylamine (NDMA) & N-nitrosomethylaniline (NMA) is catalyzed by horseradish peroxidase in the presence of hydrogen peroxide. NMA is a better substrate for peroxidase than NDMA. ... The oxidation of NDMA & NMA is inhibited by radical trapping agents (nitrosobenzene, glutathione, ascorbate, NADH). This indicates the radical mechanism for the peroxidase-mediated oxidation of both N-nitrosamines. ... Beside formaldehyde, the metabolites formed from NMA by peroxidase include aniline, p-aminophenol & phenol. Phenol formation presumably arose from N-demethylation of NMA via a benzenediazonium ion (BDI) intermediate while aniline & p-aminophenol from denitrosation of this carcinogen. ... PubMed Abstract

... Markers of ER stress (XBP1 messenger RNA processing and protein expression; GRP78 and GRP94 upregulation) and ER-mediated cell death (caspase-12 and calpain activation) were examined in kidney tissue of rats exposed to nephrotoxic doses of cisplatin (CIS), gentamicin (GEN), and p-aminophenol (PAP), a nephrotoxic metabolite of acetaminophen. XBP1 signaling was observed with all three drugs and was associated with increased expression of GRP94 and GRP78 in GEN- and PAP-treated animals, but not after CIS exposure. m-Calpain expression was increased after 7 days of CIS treatment, whereas it was decreased in PAP-treated rats. Caspase-12 cleavage products were increased after CIS, GEN, and PAP administration. The results of this study demonstrate that three clinically relevant nephrotoxic drugs are all associated with changes in markers of ER stress and ER-mediated cell death in vivo ... PubMed Abstract

4-Aminophenol (4-AP), D-serine, and cisplatin are established rodent nephrotoxins that damage proximal tubules within the renal cortex ... High throughput 2D gel proteomics to profile protein changes in the plasma of compound-treated animals, ... /demonstrated/ several markers of kidney toxicity. Male F344 and Alpk rats were treated with increasing doses of 4-AP, D-serine, or cisplatin, and plasma samples were collected over time ... Several isoforms of the rat-specific T-kininogen protein were identified in each study. T-kininogen was elevated in the plasma of 4-AP-, D-serine-, and cisplatin-treated animals at early time points, returning to baseline levels 3 weeks after treatment. The protein was not elevated in the plasma of control animals or those treated with nontoxic compounds. /It was proposed/ that T-kininogen may be required to counteract apoptosis in proximal tubular cells in order to minimize tissue damage following a toxic insult. In addition, T-kininogen may be required to stimulate localized inflammation to aid tissue repair ... Several isoforms of the inter-alpha inhibitor H4P heavy chain /were identified/ in the 4-AP and D-serine studies. In each case, the protein expression levels in the blood samples paralleled the extent of kidney toxicity, highlighting the correlation between protein alterations and clinical chemistry endpoints. A further set of proteins correlating with kidney damage was found to be a component of the complement cascade and other blood clotting factors, indicating a contribution of the immune system to the observed toxicity. These observations underscore the value of proteomics in identifying new biomarkers and in the elucidation of mechanisms of toxicity. PubMed Abstract

p-Aminophenol is a significantly toxic chemical and one mechanism associated with its cytotoxicity has been attributed to its activity as a tissue respiratory (oxidative phosphorylation) inhibitor ... .