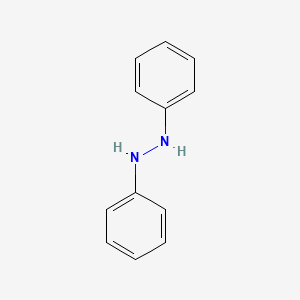 Hydrazobenzene is a colorless, crystalline compound that emits toxic fumes of nitrogen oxides when heated to decomposition. Hydrazobenzene has been used primarily in the dye manufacturing industry as the precursor of the dye intermediate benzidine and is also used as an intermediate in the manufacture of pharmaceuticals. Exposure to this substance irritates the skin, nose, throat and lungs and can eventually lead to liver, kidney and brain damage. Hydrazobenzene is reasonably anticipated to be a human carcinogen based on evidence of carcinogenicity in experimental animals. (NCI05)

In the stomach, 1,2-diphenylhydrazine can be converted into benzidine, a known human carcinogen.