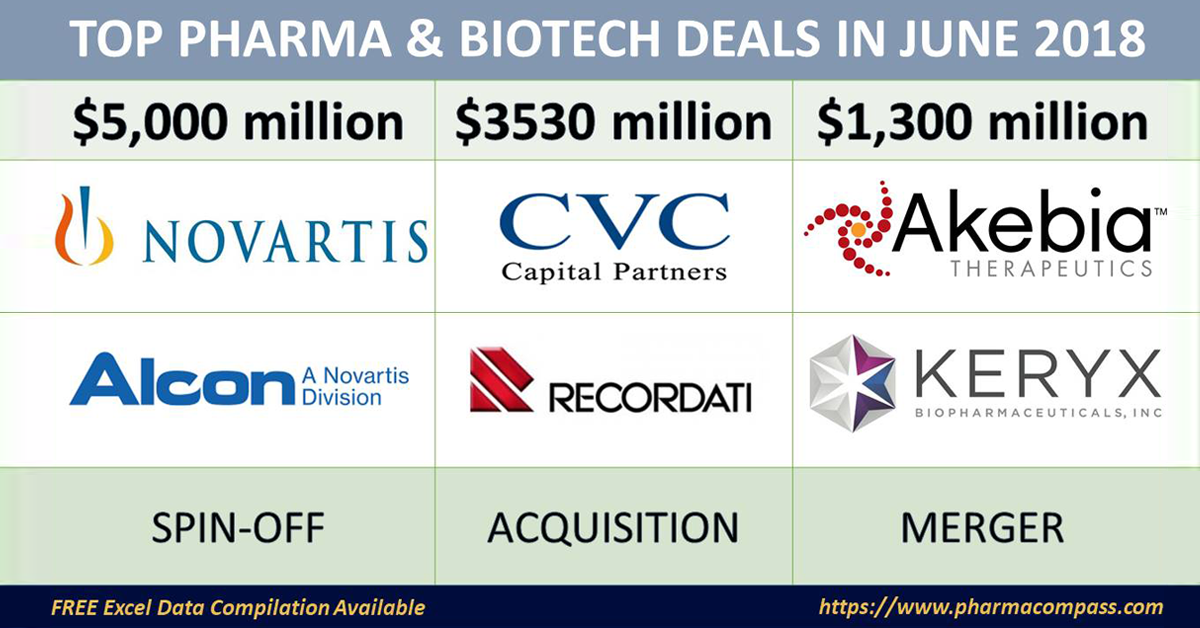 The first half of 2018 witnessed a spate of M&A activity in the pharmaceutical and biotech space with the industry witnessing some of the biggest deals from companies like Takeda, Celgene and Sanofi.

Leading the announcements in June was Novartis, as it announced its decision to spin-off Alcon, its eye-care division, and buyback shares worth US$ 5 billion.

Meanwhile, one of Italy’s billionaire pharma families — Recordati — which owned Recordati SpA, a 100-year-old pharmaceutical business, gave away its controlling stake to CVC Capital Partners in a deal worth over €3 billion (US$ 3.5 billion).

Dealmaking hasn’t stopped for Sanofi either. After its acquisitions of Bioverativ (for US$ 11.6 billion) and Ablynx (for US$ 4.8 billion) in January this year, the French drug major struck a three-year R&D collaboration agreement with Cambridge, MA-based Translate Bio for US$ 805 million.

The deal focuses on the development of mRNA vaccines for up to five infectious diseases. mRNA vaccines are an upcoming and promising alternative to conventional vaccine approaches.

Novartis announces Alcon spin-off; to buyback US$ 5 billion in shares

Swiss drugmaker Novartis Pharmaceuticals Corporation announced it plans to spin off its Alcon eye care business into a separately traded standalone company and buy back up to US$ 5 billion in stock. This is part of CEO Vas Narasimhan’s strategy to refocus on prescription drugs.

The pharma giant said the planned spinoff would enable both Novartis and Alcon to focus fully on their respective growth strategies and create a global leader in eye-care devices.

Alcon was purchased in 2011 for US$ 51.6 billion, under the regime of former Novartis boss Daniel Vasella. However, it’s been a problematic buy.

Post its acquisition, it expanded into implantable lenses for cataract patients, surgical devices and contact lenses. The Alcon division is now fully focused on surgical and vision care, and continues to be the global leader in eye-care devices. It has an estimated book value of around US$ 21.6 billion.

Joerg Reinhardt, chairman of Novartis, said: “Our strategic review examined all options for Alcon ranging from retention, sale, IPO to spinoff. The review concluded that a spinoff would be in the best interest of Novartis shareholders and the board of directors intends to seek shareholder approval for a spinoff at the 2019 AGM. This transaction would allow our shareholders to benefit from potential future successes of a more focused Novartis and a standalone Alcon, which would become a publicly traded global medtech leader based here in Switzerland.”

CVC, a world leader in private equity and credit with US$ 69 billion of assets under management, announced that a consortium of funds had agreed to buy the holding company that owns a majority interest in Recordati.

FIMEI SpA, a la Finanziaria Industriale Mobiliare ed Immobiliare SpA — the family holding company that owns 51.8 percent shares of Recordati SpA — was acquired for approximately €3 billion (US$ 3.53 billion). The consideration will be payable as approximately €2.3 billion (US$ 2.68 billion) in cash.

Furthermore, Andrea Recordati will continue to remain the CEO.

Recordati was founded by Giovanni Recordati as a business out of a family apothecary dating back to the 19th century. He created Laboratorio Farmacologico Reggiano, the predecessor to Recordati SpA, in 1926.

Giovanni died in 1952 and left the company to his son, Arrigo, who moved it to Milan a year later and began expanding research and development, product lines and access to markets outside of Italy. Arrigo died in 1999, bequeathing the business to his four children and putting management in the hands of his son Giovanni, who died last year, leaving his share to his wife.

Three of Recordati’s products date back to the family apothecary, including an anti-spasm intestinal drug created in 1927, a laxative from 1930, and Tefamin, a heart tonic, diuretic and blood-pressure-reducing agent devised in 1935.

Currently, the company is involved in chemical syntheses of intermediates and active ingredients for Recordati’s brand-name medications and has built a rare disease portfolio through its dedicated subsidiaries — Orphan Europe and Recordati Rare Diseases.

The Recordatis weren’t the only billionaires to emerge from the Italian pharmaceuticals industry, one of the nation’s best performing sectors in recent years. Luigi Rovati, founder of Rottapharm Madaus, and Alberto and Paolo Chiesi, the septuagenarian brothers behind Parma-based Chiesi Farmaceutici SpA, are also identified as billionaires.

With the intention of targeting similar patient populations, Akebia and Keryx have decided to join forces in an all-stock merger agreement, which will give Keryx stockholders about one Akebia share for every three they own today.

The deal had an implied pro forma equity value of approximately US$ 1.3 billion and the combined company will be named Akebia Therapeutics, Inc.

The merger of Akebia and Keryx creates a renal-focused company committed to offering therapeutic options to patients across all stages of CKD (chronic kidney disease), including non-dialysis dependent and dialysis dependent patients, and to become a partner of choice for the renal community and for companies developing renal products.

Keryx’s Auryxia (ferric citrate) is a US Food and Drug Administration (FDA)-approved medicine to treat dialysis dependent CKD patients. During the first quarter of 2018, Auryxia has witnessed net US sales of US$ 20.6 million, with prescription numbers rising to 34,600 (up by 119 percent).

A little more than a month back, Auryxia reported promising results from a small, open-label investigator-sponsored study that stated: “administering ferric citrate to late-stage pre-dialysis patients not only improves biochemical parameters associated with chronic kidney disease, but also has the potential to delay the need for dialysis.”

Akebia’s vadadustat is an investigational Phase 3 oral hypoxia-inducible factor prolyl hydroxylase inhibitor (HIF-PHI) with the potential to advance the treatment of patients with anemia due to CKD, many of whom are currently receiving injectable erythropoietin-stimulating agents (ESAs).

The companies believe that Auryxia and vadadustat, if approved by the FDA, have the potential to deliver an all-oral treatment approach for patients with anemia due to CKD.

Sanofi Pasteur, the vaccines division of French pharma giant Sanofi, will pay Translate Bio — a Lexington, Massachusetts-headquartered company formerly known as RaNA Therapeutics — US$ 45 million up front for rights to experimental vaccines for up to five undisclosed infectious diseases.

The deal provides Sanofi a chance to grow its vaccine pipeline after setbacks in 2017. In November, Sanofi warned of an increased risk of severe dengue in people vaccinated with Dengvaxia who haven't had prior exposure to the virus. Sanofi agreed to refund unused doses, although issues with the vaccine cost the drugmaker €158 million (US$ 184 million) in the fourth quarter last year.

Translate Bio is developing synthetic mRNA drugs, meant to coax the body into producing proteins that might be dysfunctional or missing in disease. Translate Bio is one of several companies working on it, along with CureVac, BioNTech, and Moderna Therapeutics.

Privately-held Moderna has secured more than US$ 1.6 billion in venture financings, another US$ 1 billion in partnerships, and has been valued at of over US$ 7 billion.

Sanofi paid BioNTech US$ 60 million in 2015 to co-develop mRNA-based immunotherapies for cancer. BioNTech then aligned with Genentech Inc for its mRNA-based cancer vaccine platform.

Meanwhile, Translate Bio joined the IPO club in June by raking in a handsome US$ 121.6 million that the startup aims to use for funding the clinical trials of its two lead drug candidates — MRT5005 and MRT5201. Translate got these programs through a deal with Shire at the end of 2016, making Shire Translate’s largest stockholder.

The company’s two lead programs are being developed as treatments for cystic fibrosis (CF) and ornithine transcarbamylase (OTC) deficiency (a genetic disease that causes too much ammonia to accumulate in the blood).

In late June, US biotech firm Biogen exercised its option to purchase additional shares of biopharma developer Samsung Bioepis — a joint venture established in 2012 by Samsung BioLogics and Biogen.

However, last week South Korea’s top financial regulator imposed a top-level sanction after it announced it had found intentional breaches of accounting rules at Samsung Biologics.

The Financial Services Commission said it will ask Samsung Biologics to dismiss executives in charge of accounting breaches and will also penalize an accounting firm that audited Samsung.

The inspection mostly focused on the company’s sudden profits after changing the value calculating method for Samsung Bioepis.

According to the commission, Biogen’s right to exercise a call option to raise its stake in the joint venture to 50 percent minus one share, a right effective until June 2018, was not reflected in the company’s official notice until 2015.

The missing information impacted the valuation of Samsung Biologics and its subsidiary Samsung Bioepis as Samsung BioLogics logged a one-time net profit of 1.9 trillion won (US$ 1.68 billion), after four straight years of losses.

The sudden profitability, for the first time in 2015, coincided with the initial public offering of Samsung Biologics in the Seoul stock market a year later.

Samsung has invested big in the biologics business to find a future cash cow when profits from its existing businesses dwindle.

The first half of the year has been a big year for biopharma investments with big acquisitions like Takeda’s US$ 62.2 billion acquisition of Shire.

In a recent Forbes article, an analysis by PitchBook of deals conducted so far this year talked about US$ 15 billion in healthcare startup funding from venture capital firms. This figure of US$ 15 billion is 70 percent higher than the corresponding figure for last year.

Although the number of companies that were set up in the first half of 2018 is about 10 percent lower than last year, it seems investors are making bigger investments this year.

Keep track of all that is happening with PharmaCompass’ compilation of Top Pharma & Biotech Deals — PharmaFlow.

Image Credit : Top Pharma & Biotech Deals in June 2018 by PharmaCompass is licensed under CC BY 2.0