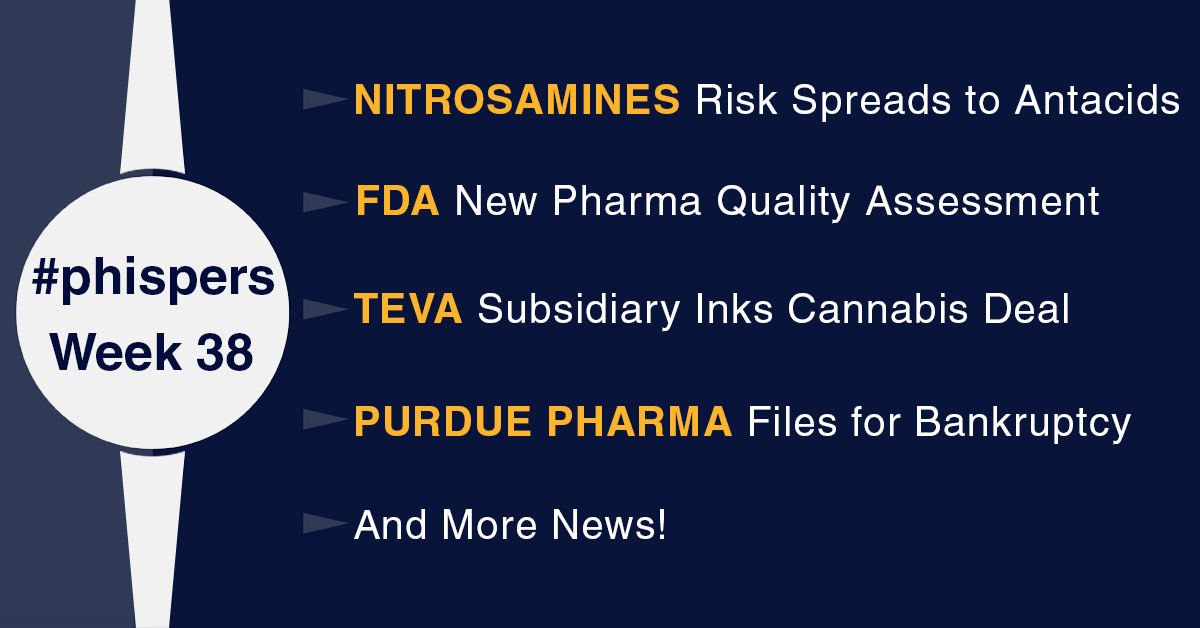 This week, Phispers brings you an update on nitrosamine impurities that had played havoc across the world last year.

The FDA found one such impurity in antacid ranitidine.

Purdue Pharma filed for bankruptcy and announced a US$ 10 billion plan to settle lawsuits that accuse its prescription painkiller — OxyContin — of fueling the deadly opioids crisis.

And a prostate drug — Terazosin — has shown promise against Parkinson’s disease.

Ranitidine is an over-the-counter (OTC) and prescription drug that decreases the amount of acid created by the stomach. Apparently, the levels of NDMA detected in ranitidine were quite low, lower than the levels found in the blood pressure medications that were recalled.

Germany’s Federal Institute for Drugs and Medical Devices issued a statement informing patients about the withdrawal of ranitidine containing products produced by the API sourced from India’s Saraca Laboratories Limited.

NDMA is classified as a probable human carcinogen (a substance that could cause cancer) based on results from laboratory tests. NDMA is a known environmental contaminant and is found in water and foods, including meats, dairy products, and vegetables.

Last year, in the case of blood pressure and heart failure medicines known as Angiotensin II Receptor Blockers (ARBs), the FDA had recommended numerous recalls as it had discovered unacceptable levels of nitrosamines.

Meanwhile, European Medicines Agency (EMA) is to start a review of ranitidine medicines at the request of the European Commission. EMA is evaluating the data to assess whether patients using ranitidine are at any risk from NDMA and will provide information about this as soon as it is available.

A subsidiary of Israeli drugmaker Teva Pharmaceuticals has signed a deal with medical cannabis company — Canndoc — to distribute its GMP products to pharma customers, including hospitals, health maintenance organizations (HMOs) and all pharmacies in Israel. Canndoc is a subsidiary of publicly traded company InterCure.

As the cannabis industry advances, more big pharma companies are likely to ink deals with cannabis firms, or even make their own forays into the space.

Lundbeck buys Alder: Danish drug major Lundbeck has agreed to buy Alder BioPharmaceuticals for US$ 2 billion. Alder develops preventive treatments for migraine in adults and the deal hopes to bring in huge profits from a potential blockbuster migraine drug — eptinezumab — for Lundbeck.

Alder’s board unanimously approved a takeover pitched at a 79 percent premium to Friday’s share price close. The move comes as Lundbeck, which specializes in treatments for illnesses such as Alzheimer’s and depression, is under pressure from patent expirations and competition from generics.

It submitted a license application for its eptinezumab antibody to the FDA in February.

Lundbeck expects the drug, used in intravenous infusion therapy, to be launched in the US in the first half of 2020.

According to reports, the price of US$ 2 billion appears high given that Alder’s eptinezumab is set to be the fourth to market behind other, more patient-friendly options, and more convenient oral drugs could soon be coming. Even if all goes well, it will be long before the acquisition pays off.

The US Food and Drug Administration (FDA) is developing a new and more standardized system — to be known as the Knowledge-aided Assessment & Structured Application (KASA) — as part of its work to improve and modernize the quality assessment of the drug applications.

In an article authored by officials from FDA’s Center for Drug Evaluation and Research, published in the latest issue of the International Journal of Pharmaceutics, the authors describe KASA as a new system that captures and manages information in a structured format about the inherent risk and control approaches for product design, manufacturing and facilities.

The system is meant to help the FDA address challenges related to its quality assessments. The authors note that when a quality assessor currently reviews a regulatory application, “it is not possible to easily locate historical data about similar products, processes, or the facilities. Such a practice has significantly reduced the efficiency of the regulatory assessment and increased the likelihood of inconsistencies. Further, in particularly urgent cases, the FDA may not have readily available up-to-date information to provide timely, thorough, and complete responses, hindering FDA’s regulatory oversight.”

But with KASA, certain rules and algorithms will be able to estimate the initial inherent product and manufacturing risks.

“After the assessor enters information in the system based on the application, a failure modes, effects and criticality analysis (FMECA) approach is employed. This is used to objectively and quantitatively assess and rank risks associated with the failure modes of drug product design and manufacturing. These are the risks that have the greatest chance of causing product and manufacturing failure or unexpected harm to the patient,” FDA officials explain.

KASA will also help with risk controls related to product design and manufacturing.

American drugmaker Purdue Pharma has filed for bankruptcy and announced a US$ 10 billion plan to settle thousands of lawsuits that accuse its prescription painkiller, OxyContin, of fueling the deadly opioids crisis.

Owned by the billionaire Sackler family, Purdue Pharma faces more than 2,000 lawsuits in the US that includes actions from nearly all states and many local governments. These lawsuits allege that Purdue falsely promoted OxyContin by downplaying the risk of addiction.

The Chapter 11 bankruptcy filing made in New York on Sunday is designed to halt the lawsuits. If approved by a judge, the deal would end the lawsuits against the company and the Sackler family. The proposal has the support of 24 state attorneys general and five territories.

Under the proposed settlement, the Sacklers will hand the firm’s assets over to a trust. It will operate a reformed company, whose board will be selected by the claimants and approved by the bankruptcy court. Money generated by the new firm could be used for drug treatment.

The opioid crisis claimed the lives of nearly 400,000 people between 1999 and 2017. The settlement is worth less than the US$ 12 billion originally envisaged. The bankruptcy court will decide how the money is allocated among the states, cities and counties.

The Sacklers have agreed to contribute at least US$ 3 billion as part of the settlement, from funds generated by selling Purdue’s UK-based subsidiary Mundipharma. Their contribution became a sticking point during the discussions.

The companies said the decision to abandon elenbecestat was based on the results of a review conducted by a data safety monitoring board, which recommended discontinuing the trials as benefits from the treatment did not outweigh its risks.

“This was widely expected by the investment community, including ourselves, and amounts to a further step in the unwinding of Biogen’s expensive, painful and ultimately fruitless investment in Alzheimer’s disease drug development,” SVB Leerink analyst Geoffrey Porges said.

Elenbecestat belongs to a class of drugs called beta amyloid cleaving enzyme (BACE) inhibitors, which act by inhibiting the production of amyloid beta — a protein believed to be a major cause of Alzheimer’s disease. However, drugmakers such as Amgen Inc and Novartis AG, Eli Lilly and Co and AstraZeneca Plc have abandoned some of their BACE inhibitor trials earlier.

The dissolution of the alliance follows the generation of mixed clinical data on Zynquista in Type 1 diabetics that failed to persuade the FDA to approve this dual SGLT1-SGLT2 inhibitor.

Sanofi will pay 80 percent of the exit fee upfront, while the remaining 20 percent will be split between two installments payable within six and 12 months of the settlement.

The FDA issued a complete response letter for Zynquista (sotagliflozin) to Sanofi in March. Months later, Sanofi revealed the drug had failed to live up to its expectations in chronic kidney disease patients, spurring its decision to terminate its collaboration with Lexicon.

An international team of scientists have found a medicine that is used to treat enlarged prostates — Terazosin — to be a powerful medicine against Parkinson’s disease. Parkinson’s disease is a progressive condition affecting the brain, for which there is currently no cure.

Terazosin helps ease benign prostatic hyperplasia (BPH) by relaxing the muscles of the bladder and prostate. The scientists have found that it also has a beneficial action on the brain cells damaged by Parkinson’s. In fact, they say the drug might slow Parkinson’s progression — something that is currently not possible.

The scientists studied thousands of patients with both BPH and Parkinson’s disease. Their findings, published in The Journal of Clinical Investigation, suggest the alpha-blocker drug protects brain cells from destruction.

Existing Parkinson’s treatments can help with some of the symptoms but can't slow or reverse the loss of neurons that occurs with the disease. Terazosin may help by activating an enzyme called PGK1 to prevent this brain cell death, the researchers said.

The trials, which will take a few years, will compare the drug with a placebo to make sure it is safe and effective in Parkinson’s.