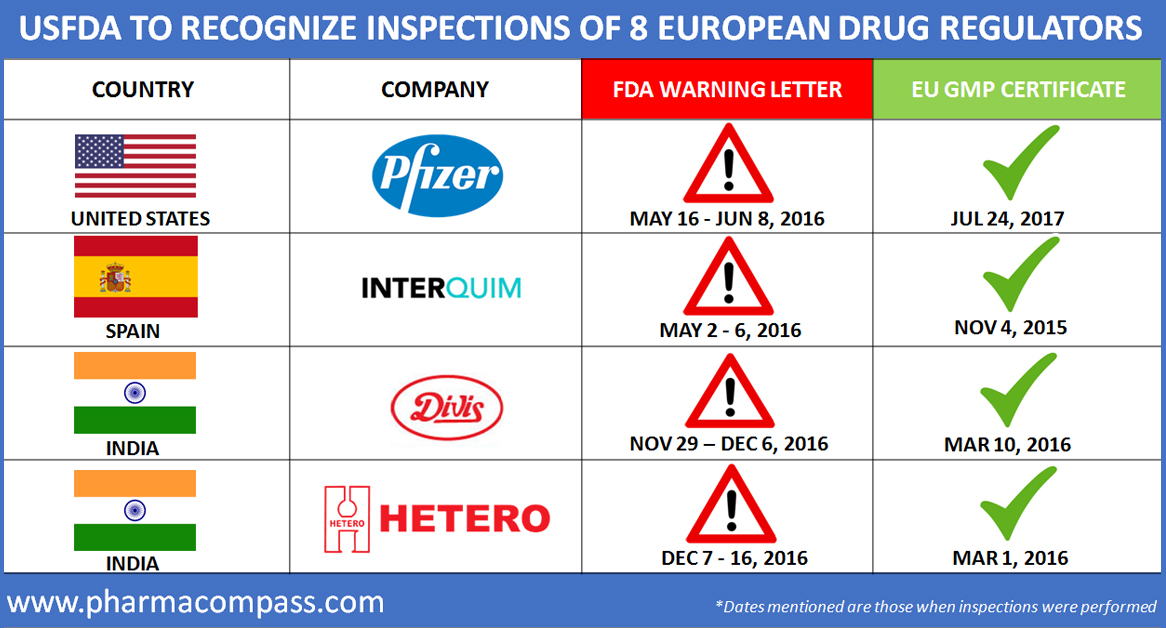 This week, the US Food and Drug Administration (FDA) and European Medicines Agency (EMA) announced that their program for mutual recognition of inspections of drug manufacturers became operational on November 1, 2017.

This is an unprecedented move — prior to this, the FDA has never recognized another country’s inspectorate.

This week, we look at a warning letter issued by the FDA to Vital Laboratories Private Limited in India, and a notice of non-compliance issued by the European regulators to another company in India — Evertogen Life Sciences Limited. After examining these non-compliances, we analyze the importance of the FDA-EMA mutual inspection recognition program.

A history of non-compliance at Vital Laboratories

In 2015, the FDA had classified the Plant I facility as “unacceptable for drug manufacturing”. And back in 2012, inspections by the French Health Agency had found both facilities to be non-compliant  with GMPs.

During this year’s inspection, the FDA investigators reviewed Vital’s annual product reviews (APR) for multiple products and observed deficiencies that were a repeat — these deviations were present in FDA’s 2013 inspection of the same site.

Vital “ignored aberrant analytical test results rather than investigating them,” the agency added. The company’s “batch production records omitted signature fields to document who performed, directly supervised, and checked each critical step” in its manufacturing process.

While the FDA investigators found there were “no signatures to identify who performed the weighing operation and who subsequently verified it”, the agency also observed that the ‘done by’ and ‘checked by’ fields in many of its batch production records were “completed by the same person”.

In its response, Vital explained that supervisors were signing for operators because the operators’ “hands were dirty”. Vital also attributed the deviations to the fact that the batch records were in English but many of its operators only understood Hindi.

Not only did the FDA find Vital’s responses inadequate, it also concluded that repeated failures at multiple sites indicate the company’s “oversight and control over the manufacture of drugs” were also deficient.

“A desktop inspection identified a critical deficiency in regard to the integrity of data, QC laboratory capability, cross contamination, a lack of senior management control and a failure of the quality system,” the MHRA said.

The firm’s quality control (QC) used “a single sample from one batch in a campaign to provide data for all batches under the direction of QC management”. The regulators also found that the firm added rejected in-process material to subsequent production batches.

The observations from the desktop inspection were confirmed during a follow-up, on-site inspection.

“Integrity of all GMP records is compromised such that there is no assurance that batches have been manufactured and tested in accordance with their relevant authorizations,” the regulators concluded.

As the mutual recognition of inspections program goes live, companies like Vital Laboratories continue to be part of the global pharmaceutical supply chain. These companies have been found to be consistently out of compliance by both the FDA and regulators from the EU. Yet, there have been other cases where the regulators have come to different conclusions about the state of a particular facility that they inspected.

READ: FDA and EU differ on cGMP standards at the same facilities: How will they mutually recognize inspections?

While the subjectivity of observations made during an inspection and variability of outcomes will not go away anytime soon, the industry has to clearly recognize the increasing need to deftly choose business partners who can assure supply sustainability, backed by consistency and an unfaltering commitment to regulatory compliance.

Image Credit : USFDA TO RECOGNIZE INSPECTIONS OF 8 EUROPEAN DRUG REGULATORS by PharmaCompass is licensed under CC BY 2.0