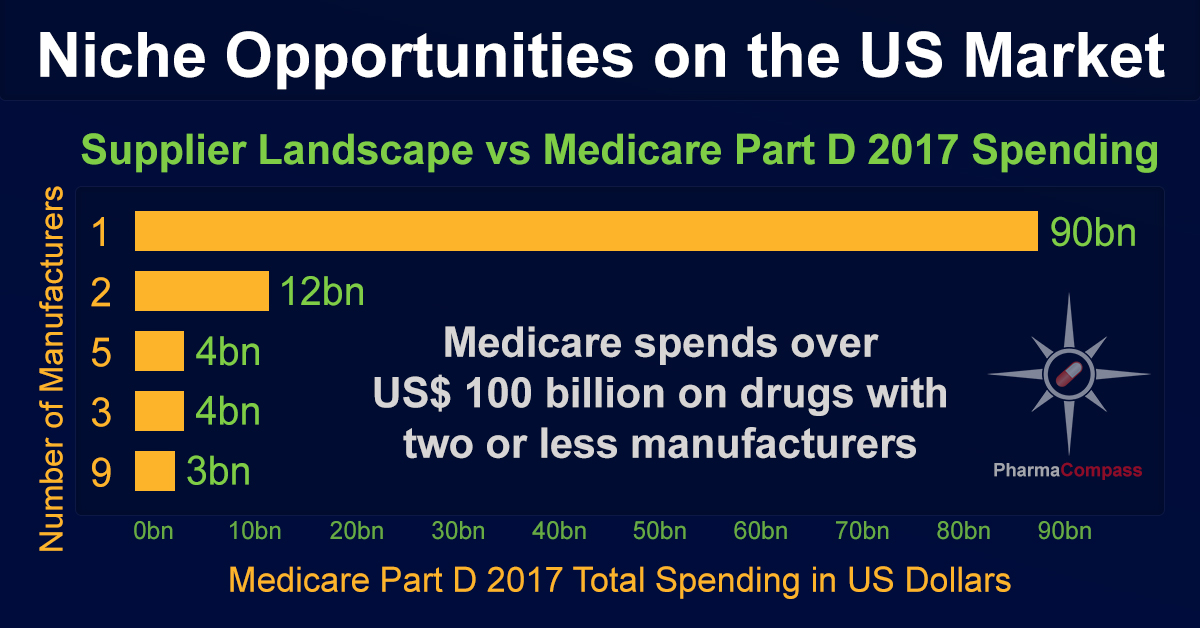 This week, PharmaCompass reviews the recently released data of the Medicare Part D Prescription Drug Program in the United States for calendar year 2017.

The US market is the world’s largest and most important pharmaceutical market, accounting around 45 percent of the global share of drugs, and was valued at US$ 466 billion in 2017.

Medicare is the federal health insurance program in the US which covered 58.4 million people in 2017 — 49.5 million aged 65 and older, and 8.9 million disabled.

Why has Medicare been in news?

The Medicare Part D drug benefit is delivered by private drug plans, which are mostly chosen by the program’s participants. Under Part D, drug prices are determined primarily through negotiations between Part D plans and providers (such as pharmacies and drug manufacturers). A key factor that helps Part D plans lower drug costs are rebate payments that the plans negotiate with drug manufacturers.

With drug pricing debate raging in the United States, these rebate payments have come under a lot of scrutiny.

During the hearing of Big Pharma executives summoned by the Senate Financing Committee last month, Sanofi’s CEO Olivier Brandicourt detailed a chart showing Sanofi and Genzyme's US sales from 2018, explaining how as much as 55 percent of Sanofi’s gross sales were given back to payers as rebates.

The chart showed how out of Sanofi’s US$ 21.6 billion in gross sales in 2018, US$ 4.5 billion was given back in mandatory rebates to government payers and US$ 7.3 billion in discretionary rebates.

Earlier this month, the Trump administration unveiled a budget that would reduce spending in Medicare as well as Medicaid by hundreds of billions of dollars compared to the current law.

What are the insights available from the 2017 US Medicare Part D data?

The Medicare Drug Spending dashboards were updated earlier this month to include data for 2017, providing more data and transparency to better identify trends and track consumption and price changes over time.

Using the available data, PharmaCompass has developed its own dashboard to show recent trends in consumption of prescription drugs under Medicare D. Our dashboard also helps identify drugs with limited to no competition.

The data reveals that while almost 60 percent of the Medicare spend (nearly US$ 90 billion) is for drugs with only one manufacturer, i.e. mostly patented drugs, there is another US$ 12 billion spend on drugs which have only two manufacturers. The next highest spend — of US$ 4 billion — is on drugs with as many as five manufacturers.

This clearly indicates that if the market can support up to five manufacturers for established products, increased generic competition will significantly help Medicare reduce its Part D prescription drug spending.

Drugs with limited to no competition can be identified using the dashboard by sorting for drugs with few manufacturers.

Information is also provided on drug uses and clinical indications, thereby enabling comparison between different medications for a given condition.

Image Credit : Niche Opportunities on the US Market by PharmaCompass is licensed under CC BY 2.0