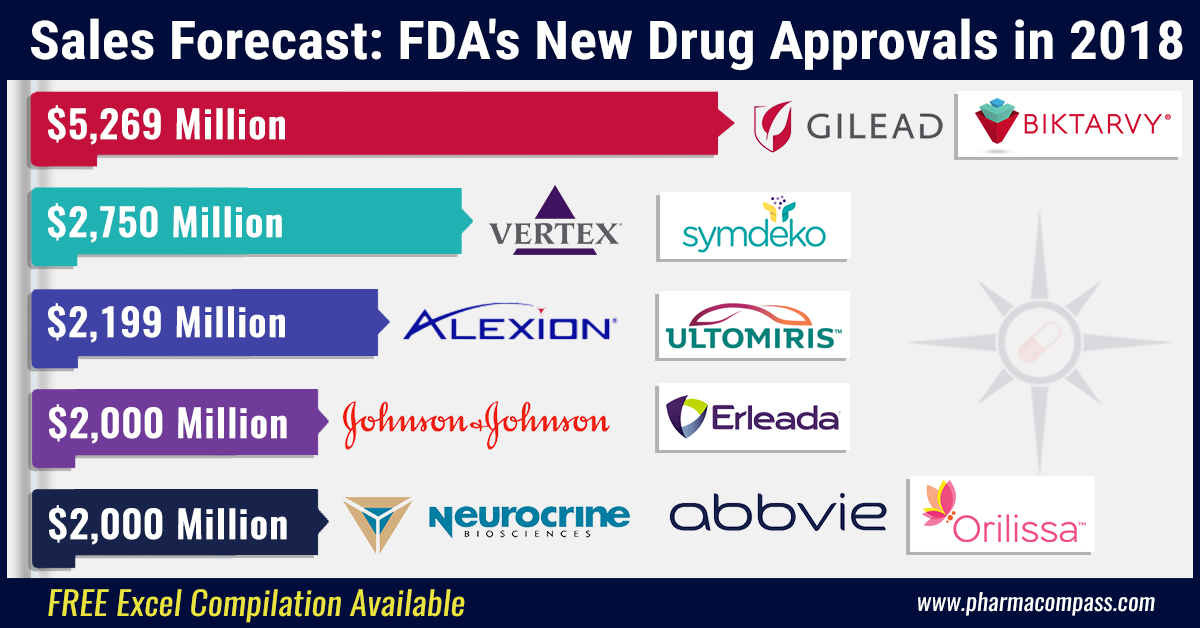 The year 2018 was a landmark year for the US Food and Drug Administration (FDA) as the agency approved a record number of novel drugs. FDA approved 62 novel drugs in 2018, out of which 34 were orphan drugs. FDA’s Center for Drug Evaluation & Research (CDER) approved 59 drugs while the other three were approved by the Center for Biologics Evaluation and Research (CBER).

In a speech towards the end of the year, FDA Commissioner Scott Gottlieb said: “Far more important than the overall quantity of approvals however is the quality of the new drugs”. He went on to add that some “of [the] previous records were set in years when there were a lot of drugs that critics bemoaned were me-too medicines,” or novel chemical entities that addressed the same common, therapeutic targets.

In 2018, FDA reversed three earlier drug rejections, approved the first cannabis-based drug, allowed the first ever RNA interference drug to market and gave the green light to Loxo Oncology/Bayer’s Vitrakvi (larotrectinib) which became the second anti-cancer drug (after Merck’s Keytruda) to bag an approval that treats cancer based on a biomarker across different types of tumors rather than the location in the body where the tumor originated.

PharmaCompass compiled the peak sales estimates of the new drugs approved in 2018 and in our compilation, Gilead’s antiretroviral treatment for HIV — Biktarvy — topped the charts with an estimated sales potential of almost US$ 5.3 billion followed by Vertex’s cystic fibrosis drug Symdeko that is expected to bring in US$ 2.75 billion.

Alexion’s Ultomiris, Abbvie’s Orilissa, Novartis’ Lutathera and J&J’s Erleada are all expected to bring in more than US$ 2 billion for their companies at their peaks.

Although Loxo’s cancer drug, with an estimated US$ 860 million in peak sales, did not make it to the list of top 15 drugs in 2018 by sales potential, the company got purchased by Eli Lilly earlier this month for US$ 8 billion.

For 2018, Pfizer led the approvals with four drugs that got the green light, followed by Shire with three drugs. Companies like AstraZeneca, Array Biopharma, Alynlam and Paratek Pharmaceuticals each won two drug approvals. Merck also had two approvals which were in cooperation with other companies.

Amgen, Teva and Eli Lilly got their CGRP inhibitors for migraine prevention approved within a few months of each other.

CBD is a chemical component of the Cannabis sativa plant, more commonly known as marijuana. And Epidiolex is the first marijuana-based drug to be approved in the US for epilepsy. It is produced by GW Pharmaceuticals.

CBD does not cause intoxication. It is one of the hundreds of molecules found in marijuana and has been cited by scientists as a potential treatment for mental health issues.

2018 saw the launch of one-dose flu cure from Shionogi

In March 2018, Shionogi & Co Ltd.’s Xofluza — a pathbreaking drug that cures flu with just one dose — was approved in Japan. The drug is a treatment for influenza A and influenza B.

In October, the US Food and Drug Administration (FDA) also approved Xofluza (baloxavir marboxil). Xofluza is the first new antiviral flu treatment with a novel mechanism of action approved by the FDA in nearly 20 years.

The single dose feature gives Xofluza an edge over other neuraminidase inhibitors like Tamiflu and Relenza. For example, Tamiflu typically requires two doses each day for five days. Therefore, there are nine more doses of Tamiflu required, as compared to the single-dose Xofluza.

Shionogi aims to double the global market for flu treatment with Xofluza.

“While the global market of flu drug is said to be about US$ 1 billion to US$ 1.5 billion, we want to expand it to around US$ 3 billion,” Shionogi CEO Isao Teshirogi said last year.

Though the FDA approval for Xofluza has been granted to Shionogi, Genentech (a member of the Roche Group which marketed Tamiflu, which is now a generic) will be marketing the medication in the US.

Industry gets far lower returns from its drug launches

Gottlieb used Twitter to promote the progress of FDA’s review cycle. “In 2018, CDER met its PDUFA goal for 100 percent of the novel drugs approved – 95 percent of which on the first cycle – reflecting our efficiency in getting new therapies to patients quickly,” he tweeted.

A ‘cycle’ is the time from when CDER accepts an application for a new drug until the agency decides whether to approve it or not.

However, the record number of approvals doesn’t present the complete picture for the pharmaceutical industry. A study published in December by Deloitte highlighted that the industry is getting far lower average returns from its drug launches than ever before. While the costs to bring a drug to market have almost doubled in eight years to over US$ 2 billion, peak sales forecasts have halved to a little over US$ 400 million, the study said.

Drug discovery reviews in the scientific publication Nature reached a similar conclusion. “Projected peak annual sales for new therapeutic drugs (NTDs) approved in 2018 total US$ 45 billion — lower than 2017’s US$ 58 billion — and the value of the average peak sales per product has continued to trend down to only US$ 720 million per drug in 2018, the lowest figure in almost a decade,” the publication said.

“The decline is driven both by fewer blockbusters at the top end, as well as a proliferation of very small products at the bottom end. We believe the underlying driver of both these trends — more approvals but smaller markets per approval — is better understanding of biology fostering precision medicine,” it added.

After suffering brutal losses towards the end of 2018, wherein biotech was among the US stock market’s most oversold sectors and saw a decline of nearly 10 percent, this year the biotech sector has got off to the best start since 2012.

While the industry expects to see a lot more mergers and acquisitions in 2019, where smaller biotech companies get acquired by major pharmaceutical corporations, it is unlikely that the general trend of companies bagging more approvals for targeted therapies with a smaller peak sales potential is going to reverse anytime soon.

Image Credit : Sales Forecast of FDA’s Novel Drugs Approvals in 2018 by PharmaCompass is licensed under CC BY 2.0