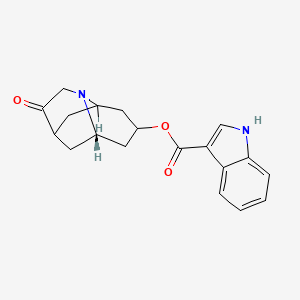 Also known as: 115956-12-2, Dolasetron [inn:ban], Dolasetronum [inn-latin], Unii-82wi2l7q6e, 82wi2l7q6e, Hsdb 7565
Molecular Formula
C19H20N2O3
Molecular Weight
324.38  g/mol
InChI Key
UKTAZPQNNNJVKR-UDXKHGJESA-N
FDA UNII
82WI2L7Q6E
Dolasetron is an antinauseant and antiemetic agent indicated for the prevention of nausea and vomiting associated with moderately-emetogenic cancer chemotherapy and for the prevention of postoperative nausea and vomiting. Dolasetron is a highly specific and selective serotonin 5-HT3 receptor antagonist. This drug is not shown to have activity at other known serotonin receptors, and has low affinity for dopamine receptors.
1 2D Structure

Dolasetron injection is indicated for the treatment of postoperative nausea and/or vomiting. /Included in US product label/

/Administration is contraindicated in patients with/ known hypersensitivity to dolasetron mesylate.

Acute, usually reversible ECG alterations and/or risk of altered cardiac conduction. Prolongation of PR, QTC, and JT intervals and widening of the QRS complex have been observed in patients receiving dolasetron therapy. These alterations, which are caused by prolongation of cardiac depolarization and repolarization, appear to be related to plasma concentrations of the active metabolite hydrodolasetron and generally are self-limiting as these concentrations decline. ECG interval prolongation rarely has resulted in heart block or cardiac arrhythmias. Sudden death has occurred in at least one patient 6 hours after receiving IV dolasetron (1.8 mg/kg), although the patient had other potential risk factors such as prior therapy with doxorubicin and concomitant cyclophosphamide.

Dolasetron should be used with caution in patients who have or may develop prolongation of cardiac conduction intervals, particularly QTC, including those with congenital QT syndrome, those with uncorrected hypokalemia or hypomagnesemia, patients receiving diuretics that may induce electrolyte abnormalities, patients receiving antiarrhythmic agents or other drugs that alter cardiac conduction (e.g., prolong QT interval), and those receiving cumulative high-dose anthracycline therapy.

Not known whether dolasetron mesylate or its metabolites are distributed into milk in humans. Caution is advised if the drug is administered in nursing women.

FDA Pregnancy Risk Category: B /NO EVIDENCE OF RISK IN HUMANS. Adequate, well controlled studies in pregnant women have not shown increased risk of fetal abnormalities despite adverse findings in animals, or, in the absents of adequate human studies, animal studies show no fetal risk. The chance of fetal harm is remote but remains a possibility./

Dolasetron is a highly specific and selective serotonin 5-HT3 receptor antagonist, not shown to have activity at other known serotonin receptors and with low affinity for dopamine receptors. It is structurally and pharmacologically related to other 5-HT3 receptor agonists. The serontonin 5-HT3 receptors are located on the nerve terminals of the vagus in the periphery, and centrally in the chemoreceptor trigger zone of the area postrema. It is suggested that chemotherapeutic agents release serotonin from the enterochromaffin cells of the small intestine by causing degenerative changes in the GI tract. The serotonin then stimulates the vagal and splanchnic nerve receptors that project to the medullary vomiting center, as well as the 5-HT3 receptors in the area postrema, thus initiating the vomiting reflex, causing nausea and vomiting.

Dolasetron is an indole derivative and a potent serotonin 5-HT3 receptor antagonist with anti-emetic property. Dolasetron blocks the activity of serotonin released from the enterochromaffin cells of the small intestine by selectively inhibiting and inactivating 5-HT3 receptors located on the nerve terminals of the vagus nerve in the periphery and centrally in the chemoreceptor trigger zone of the area postrema. This results in suppression of signalling to trigger chemo- and radiotherapy induced nausea and vomiting.

Drugs that bind to but do not activate serotonin receptors, thereby blocking the actions of serotonin or SEROTONIN RECEPTOR AGONISTS.

Hydrodolasetron is eliminated by multiple routes, including renal excretion and, after metabolism, mainly glucuronidation, and hydroxylation.

Orally-administered dolasetron is well absorbed, but the parent drug is rarely detected in plasma due to rapid and complete metabolism to hydrodolasetron.

Mean apparent volume of distribution /of hydrodolasetron/ is 5.8 liters per kg body weight.

Radiolabeled dolasetron was not found to be distributed extensively to blood cells.

It is not known whether dolasetron is distributed into human breast milk.

Elimination /as/ hydrodolasetron /is/ renal, 67% (53% unchanged and, to a lesser extent, as hydroxylated glucuronides and N-oxide metabolites). Fecal elimination /accounts for/ 33%, as metabolites.

It is not known if dolasetron is removable by hemodialysis or peritoneal dialysis.

... Twenty-four healthy male subjects were orally dosed with dolasetron mesylate, 200 mg, after either an overnight fast or a high-fat breakfast. The ratio of the mean area under the plasma concentration-time curve of the reduced active metabolite (MDL 74,156) to infinity (AUC(0-infinity)) values in fed compared to fasting subjects was 86.3% with a 90% confidence interval for the ratio within (80, 125)%, indicating bioequivalence. The ratio of the mean MDL 74,156 maximum plasma concentration (Cmax) values was 70.6% in fed versus fasted subjects. The time to Cmax was statistically significantly longer after the high-fat breakfast (mean values, 1.11 hr fasting and 1.80 hr fed), probably due to delayed gastric emptying. It may be concluded that, although the rate of absorption was somewhat delayed, the extent of absorption did not change significantly when dolasetron mesylate was given with food.

Following intravenous administration to healthy male subjects of doses ranging from 0.6 to 5 mg/kg, dolasetron disappeared extremely rapidly from plasma; concentrations were generally measurable for only 2-4 hr. Less than 1 percent of the dose was excreted intact in urine. A major plasma metabolite, reduced dolasetron, peaked rapidly at approximately 0.625 hr (median). Its median terminal disposition half-life was 7.56 hr; median values for fraction of dose excreted in urine and renal clearance were 31.0 percent and 2.68 mL/min/kg, respectively. Over the dose-range covered, pharmacokinetics of both dolasetron and reduced metabolite appeared to be independent of dose. The median ratio of the areas under the plasma concentration-time curves for metabolite relative to dolasetron was 11.9. As a result of its activity and significant plasma concentrations, reduced dolasetron may play a significant role in pharmacodynamic activity.

...Patients with renal impairment were stratified into three groups of 12 based on their 24-hour creatinine clearance (Cl(cr)): group 1, mild impairment (Cl(cr) between 41 and 80 mL/min); group 2, moderate impairment (Cl(cr) between 11 and 40 mL/min); and group 3, endstage renal impairment (Cl(cr) < or = 10 mL/min). Twenty-four healthy volunteers from a previous study served as the control group. Each participant received a single intravenous or oral 200-mg dose of dolasetron mesylate on separate occasions. Serial blood samples were collected up to 60 hours after dose for determination of dolasetron and hydrodolasetron, and urine samples were collected in intervals up to 72 hours for determination of dolasetron, hydrodolasetron, and the 5' and 6'-hydroxy metabolites of hydrodolasetron. Because plasma concentrations were low and sporadic, pharmacokinetic parameters of dolasetron were not calculated after oral administration. Although some significant differences in area under the concentration-time curve (AUC0-infinity), volume of distribution (Vd), systemic clearance (Cl), and elimination half-life (t1/2) of the parent drug were observed between control subjects and patients with renal impairment, there were no systematic findings related to degree of renal dysfunction. The elimination pathways of hydrodolasetron include both hepatic metabolism and renal excretion. Consistent increases in mean Cmax, AUC0-infinity, and t1/2 and decreases in renal and total apparent clearance of hydrodolasetron were seen with diminishing renal function after intravenous administration of dolasetron mesylate. No consistent changes were found after oral administration. Urinary excretion of hydrodolasetron and its metabolites decreased with decreasing renal function, but the profile of metabolites remained constant. ...

Biotransformation /is/ hepatic and complete, mainly to the active metabolite hydrodolasetron (by means of the ubiquitous enzyme, carbonyl reductase). Further hydroxylation is mediated by cytochrome P450 CYP2D6 and further N-oxidation by both CYP3A and flavin monooxygenase.

The metabolism of dolasetron mesylate was studied in six healthy male volunteers who were given a single 300 mg oral dose of [14C]dolasetron mesylate. An average of 59% of the total radioactivity was recovered in the urine and 25% in the feces. Metabolites were quantitated in urine samples taken up to 36 hr post-dose. Reduced dolasetron (RD) accounted for 17-54% of the dose in urine. Hydroxylated metabolites of RD made up no more than 9% of the dose in urine. Most of the remaining urinary radioactivity consisted of conjugated metabolites of RD and hydroxy RD. Hydrolysis of selected urine samples showed that the glucuronide of RD was the most abundant conjugate in urine. A small percentage of the dose (< 1%) in urine was identified as the N-oxide of RD. Analysis of urine samples by chiral HPLC indicated that the R(+):S(-) ratio of RD was approximately 9:1.

The initial step in the metabolism of dolasetron or MDL 73,147EF [(2 alpha, 6 alpha, 8 alpha, 9a beta)-octahydro-3-oxo-2,6-methano-2H- quinolizin-8-yl 1H-indol-3-carboxylate, monomethanesulfonate] is the reduction of the prochiral carbonyl group to give a chiral secondary alcohol "reduced dolasetron." An HPLC method, using a chiral column to separate reduced dolasetron enantiomers, has been developed and used to measure enantiomers in urine of rats, dogs, and humans after dolasetron administration. In all cases, the reduction was enantioselective for the (+)-(R)-enantiomer, although the dog showed lower stereoselectivity, especially after iv administration. An approximate enantiomeric ratio (+/-) of 90:10 was found in rat and human urine. The contribution of further metabolism to this enantiomeric ratio was considered small as preliminary studies showed that oxidation of the enantiomeric alcohols by human liver microsomes demonstrated only minor stereoselectivity. Further evidence for the role of stereoselective reduction in man was obtained from in vitro studies, where dolasetron was incubated with human whole blood. The enantiomeric composition of reduced dolasetron formed in human whole blood was the same as that found in human urine after administration of dolasetron. Enantioselectivity was not due to differences in the absorption, distribution, metabolism, or excretion of enantiomers, as iv or oral administration of rac-reduced dolasetron to rats and dogs lead to the recovery, in urine, of essentially the same enantiomeric composition as the dose administered. It is fortuitous that the (+)-(R)-enantiomer is predominantly formed by carbonyl reductase, as it is the more active compound.

Following intravenous administration to healthy male subjects of doses ranging from 0.6 to 5 mg/kg, dolasetron disappeared extremely rapidly from plasma; concentrations were generally measurable for only 2-4 hr. Less than 1 percent of the dose was excreted intact in urine. A major plasma metabolite, reduced dolasetron, peaked rapidly at approximately 0.625 hr (median). Its median terminal disposition half-life was 7.56 hr ...

Dolasetron is a selective serotonin 5-HT3 receptor antagonist. In vivo, the drug is rapidly converted into its major active metabolite, hydrodolasetron, which seems to be largely responsible for the drug's pharmacological activity. The antiemetic activity of the drug is brought about through the inhibition of 5-HT3 receptors present both centrally (medullary chemoreceptor zone) and peripherally (GI tract). This inhibition of 5-HT3 receptors in turn inhibits the visceral afferent stimulation of the vomiting center, likely indirectly at the level of the area postrema, as well as through direct inhibition of serotonin activity within the area postrema and the chemoreceptor trigger zone.

Dolasetron, and its active metabolite hydrodolasetron, are highly specific and selective antagonist of serotonin subtype 3 (5-HT3) receptors. 5-HT3 receptors are present peripherally on vagal nerve terminals and centrally in the area postrema of the brain. Chemotherapeutic medications appear to precipitate release of serotonin from the enterochromaffin cells of the small intestine, which activates 5-HT3 receptors on vagal efferents to initiate the vomiting reflex. Dolasetron has not been shown to have activity at other known serotonin receptors, and has low affinity for dopamine receptors.

The active metabolite of dolasetron (i.e., hydrodolasetron) may block sodium channels and prolong cardiac depolarization and, to a lesser extent, repolarization time.